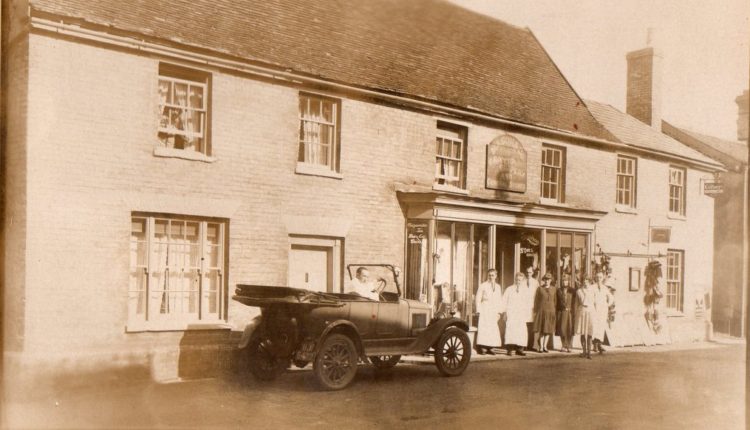 We hope it won’t be too long before we can welcome visitors to the museum again but meanwhile hope you will enjoy learning a little bit more about Woolpit from photographs.

This one dates from the early 1900s and shows the building that is now the East of England Co-op. It was known as ‘Mason’s Stores’ and was run by several generations of the Mason family. The name first appears in a trade directory of 1865 and the sign above the window in the photograph reads ‘Mason & Co. Grocers, Drapers and General Stores’. Older residents of Woolpit remember that food was sold on the ground floor and non-food items were available upstairs.

To the right is a sign that reads ‘Gilbey’s Wines and Spirits’. We know from later trade directories that Mason’s acted as agents for Gilbey’s and it is possible that this was happening when the photograph was taken as there is no obvious separate entrance to Gilbey’s. Today the Co-op window extends across this part of the building but the roof line is still the same and it is easy to see that it was once a separate shop or dwelling. Mason’s also acted as agents for the Norwich Union Insurance Company from 1880 until 1981.

The family played a prominent part in village life. Frank Mason served as a parish councillor for many years before and after the First World War and his brother Benjamin chaired the annual parish meeting for a similar period of time. It is likely that some of the people in the photograph are members of the family and it possibly Frank or Benjamin in the carefully positioned car. Today the name is remembered in Masons Lane which runs along the side of the Co-op and then behind the church.