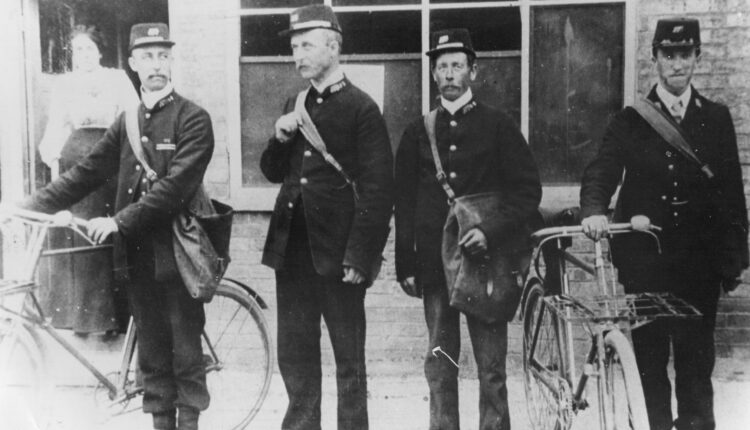 We hope to resume our regular opening times in the spring of 2021. However, if anyone is especially keen to visit before then, we are willing to open by appointment. If you would like to do this, please email for more details: [email protected].

Our photograph for this month, currently on display in the museum, dates from about 1910 and shows four village postmen. From left to right they are George Cook, Jack Bendall, Harry Ruddock and Jack Caley. The lady in the background is probably the postmistress, Mrs Grace Bendall. At this date, the post office was situated opposite The Swan Inn in the building now occupied by Palmer’s Bakery. It stayed in this location probably until the early 1930s and then moved to what is now Addison House, but was then a thriving butchers and grocery shop. Today Woolpit’s post office is part of the Co-op and the former post office is a private house, but it is easily identified by the pillar box outside and the ‘Postal Telegraph Office’ sign on the wall.

In 1910 letter writing was almost the only way for people to keep in touch with friends and family who didn’t live locally, as well as being very important for business purposes. A letter weighing up to four ounces could be sent to anywhere in the UK for one penny. There were two deliveries every day, including regular deliveries on Sundays and even on Christmas Day. Letters were sorted in the village and Woolpit had its own post mark. These postmen were clearly busy people. The two with bicycles would have had rounds some distance from the village centre. They all look very smart in their uniforms but must have got very hot in the summer months!