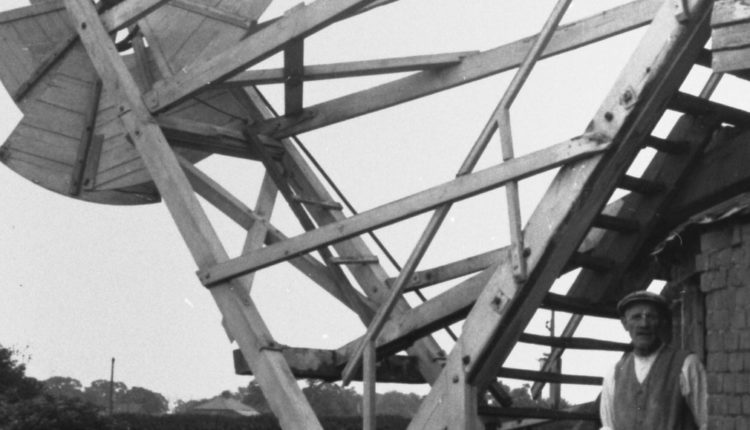 As yet we do not know when we will be able to reopen the museum so will continue to feature a photograph from one of our current displays each month.

Woolpit used to have two mills. One stood in Mill Lane and was demolished in the 1920s, and this one stood in Broom Hill Lane. It was run by the Elmer family for many years and we believe the gentleman in the photograph is Harry Elmer who, like the Mason brothers who featured in last month’s article, played an important part in Woolpit village life in the 1890s and on into the 20th century.

The mill ceased grinding corn in 1945 and was bought by Sidney Darby who was developing the surrounding land for gravel extraction. He offered it to West Suffolk County Council as a historic monument but neither they nor anyone else wanted to pay for its restoration. In October 1963 strong winds hurled the sails to the ground, and tons of stone and timber shattered the rest of the mill as they tumbled down. Ironically, demolition was due to start the following week.

The Elmer family also ran a bakery in the village centre which presumably used flour from the family mill. Harry’s son Dick Gentry Elmer and his wife Hilda (also known as Poppy) continued to run it for some years after the mill closed and some older residents remember purchasing fresh bread and cakes from them. The building is now the Elm Tree Gallery but is also known as The Old Bakery.

Probably like many other local people taking regular exercise walks during lockdown, we have several times been along Broom Hill Lane and looked across the fields to the two mills at Drinkstone. I always try to imagine Elmer’s mill forming number three in this view.