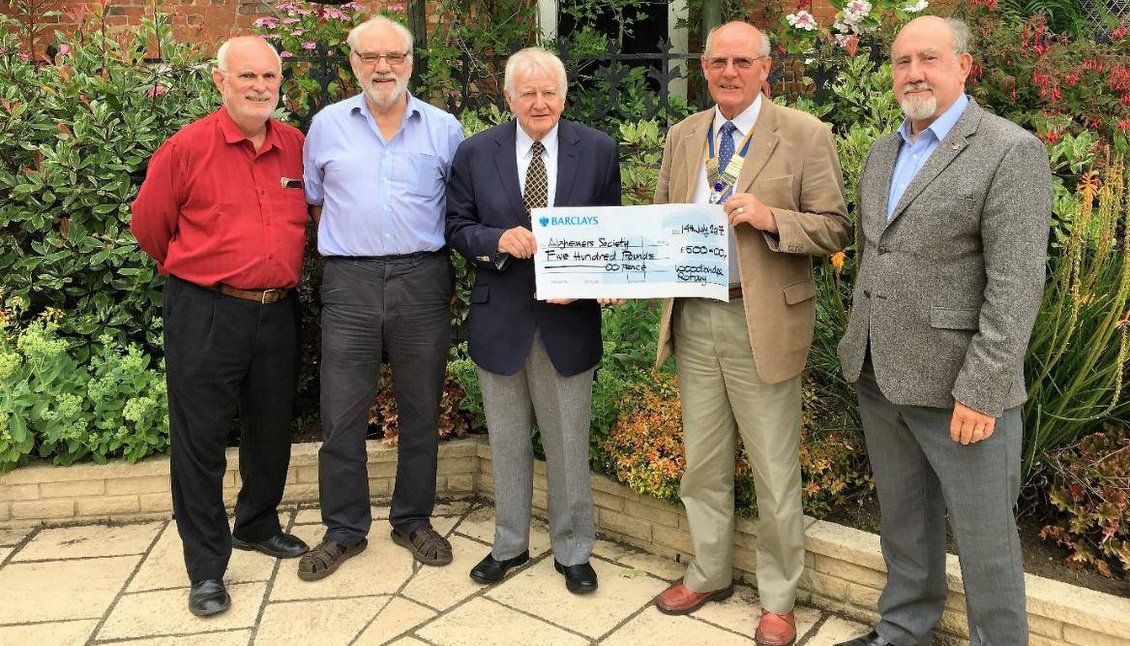 Woodbridge Regatta and Riverside Fair was very well attended and they were delighted to welcome lots of visitors to their bottle stall. Steve Worrall, from The Blood Runners, brought along a children’s motorbike for the children to enjoy. It made lots of noise and seemed extremely popular!

Following a talk by Jenna Veneziani, of the Alzheimer’s Society, earlier this year, they were delighted to welcome Richard Warnock, a volunteer with the society, to receive a cheque for £500. This money was raised at the very enjoyable Jazz Concert Evening, which was held in April.

Richard gave a short talk, where his commitment and enthusiasm for the work, the society does, was evident. Like many people, he started his connection with the society for personal family reasons and has thankfully seen the response of the wider society to those with Alzheimer’s, improve measurably over the years.

Jenna Veneziani is part of the community fundraising team at the Alzheimer’s Society. To illustrate the disease, she compared Alzheimer’s to a string of fairy lights in the brain which start to flicker and turn off intermittently with varying speeds and frequency in different people. There is no set pattern to the disease and each person has their own individual journey. Her analogy is simple but effective.

According to the most recent data collected, there are approximately 11,000 people with Alzheimer’s in Suffolk and 16,000 in Norfolk. However, it is estimated that around 60% of sufferers go under the radar and are never diagnosed. With an increasingly aging population, it is likely that the disease will become even more common. Also, Alzheimer’s has no respect for age, with younger people being diagnosed, which will also add to the number in the future.

Rather than ignore the problem, the Alzheimer’s Society aims to increase awareness of the disease, along with providing support and knowledge, for those who have the disease and their families. A recent initiative is the Side by Side support, that they are hoping to extend to as many people as possible.

The society is also working in the wider community. A small example is explaining to supermarkets that the black mats they have at their doors are often viewed as ‘black holes’ by sufferers, which can lead to confusion and sometimes fear. Changing the mat colour is a simple and effective way to eliminate this problem. An easy and relatively cheap solution, to make a visit to the shop more enjoyable.

Jenna’s passion for her role is apparent and she is hopeful that continued research and endeavour will lead to a better future, for sufferers and their families.

They were delighted to welcome the Mayor of Woodbridge, Councillor Clare Perkins to their lunchtime meeting on Friday 4th August, to talk about her aspirations and ambitions for Woodbridge, during her term of office.

One of her strong beliefs, is that the creative arts have therapeutic benefits, alongside pure enjoyment and interest. The list of events planned is diverse and there will be events, which appeal to all tastes.

The talk was enjoyable and informative and the mayor’s passion to provide opportunities for people to enjoy living in and visiting Woodbridge, was apparent.