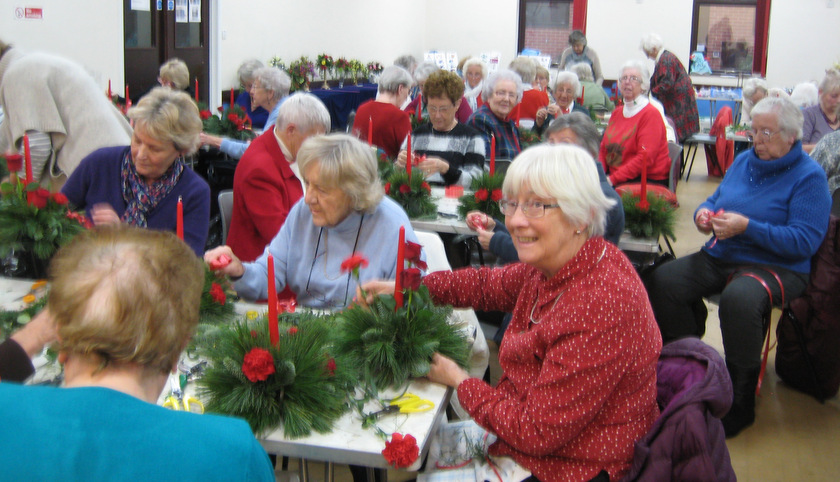 Woodbridge Flower Club held a workshop meeting in December, so that members would all have a chance to make their own Christmas decoration. Rosemary began the meeting by welcoming everyone ,especially guests and new members. She then introduced Debbie Buckles, who was their demonstrator and teacher for the afternoon.

They were all given their foliage, materials and flowers for the design and then Debbie gave theam instructions on how to fix their candle and oasis before putting in the conifer foliage.

Next, they added red carnations and roses to the arrangement. Debbie then showed them how to make bows from ribbon, which many of them found quite difficult. However with Debbie’s help, everyone ended up with a lovely Christmas design to take home.

After tea, coffee and mince pies, they had a raffle and then the winners of this month’s competition were announced.

The competition was for an inverted crescent design and there were 3 winners. Amanda Tett won the experienced class. Linda Spinks for the intermediate class and the winner for the beginner class was Louise Fortescue.

Debbie was thanked for an enjoyable and productive afternoon.

They all wished one another a very Happy Christmas and are looking forward to their next meeting, which will be held on the first Wednesday afternoon in February.