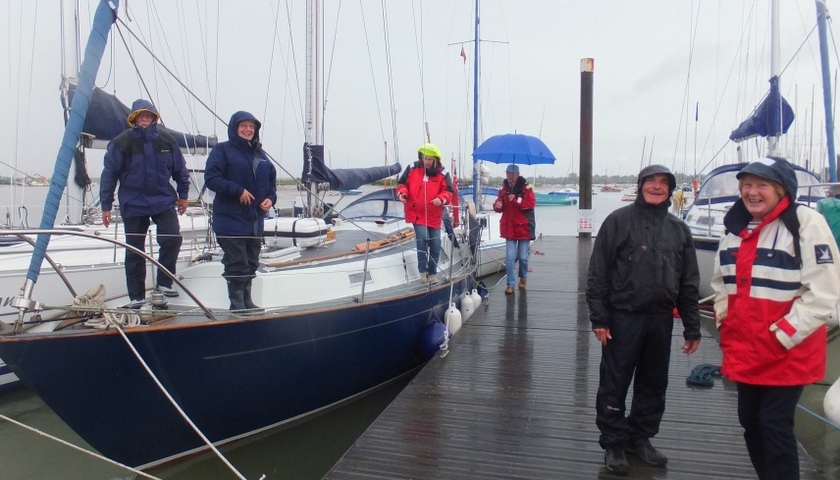 A record 80 members attended the annual club barbecue on the August Bank Holiday, which in itself is not sensational, but this time they were blessed with the hottest bank holiday Monday for 50 years and they were able to sit outside in the sunshine. Fortunately beer stocks were high in anticipation of Maritime Woodbridge (alas cancelled) and so no-one went thirsty and the wide array of salads ensured that no-one went hungry either.

On the sailing front, Mark Richardson led an eventful cruise to the Blackwater which attracted 15 boats, quite a flotilla. Things got off to a poor start on arrival at Brightlingsea in the pouring rain, but being used to water, they dripped their way ashore for a couple of pints and an Indian meal courtesy of the harbourmaster’s water taxi service. Next day a planned picnic had to be modified, but that was the signal for the weather to improve and theu arrived at Heybridge the following day in warm sunshine.

Locking into the Chelmer Canal provided entertainment for the patrons of the adjoining beer garden, but was generally accomplished without any serious problems. The return journey took thempast the old Radio Caroline anchored in the River Blackwater, bringing the odd tear to the eyes of some old Tony Blackburn fans, and on to West Mersea where they picked up mooring buoys, eventually! A day ashore to stretch legs enabled a visit to the renowned seafood restaurants which the town proudly offers before drifting down the Wallet on the following day back to home ports.

At the time of writing, eight boats are preparing for a cruise to northern France with a close eye on the weather. Future trips to Europe could well be affected by the outcome of the Brexit negotiations and it’s possible that they might go back to the old days of flying a ‘Q’ flag on entry into a foreign port, with its attendant laborious customs formalities. At the present rate of progress, this could be some way off, but the situation is being closely followed.

The glistening spider’s webs in the boats’ rigging and the shortening hours of daylight signal the approaching end of the cruising season and plans are now well advanced for the winter social programme. As well as club functions the newly redecorated clubhouse is used for day/evening classes run by outside organisations and for RYA training.

There are still places available on the training courses and also dates are available for hire of the clubhouse for suitable classes.