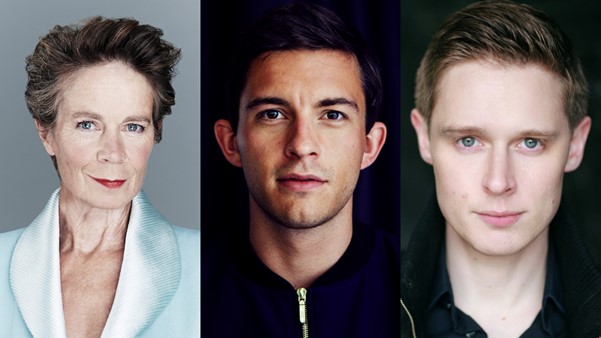 More Outstanding Names Added to Cast List of What A Carve Up!

The Barn Theatre in Cirencester, the Lawrence Batley Theatre in Huddersfield and the New Wolsey Theatre in Ipswich have announced the full cast for the digital world premiere of Henry Filloux-Bennett’s online play What A Carve Up!, based on Jonathan Coe’s critically acclaimed satirical novel.

The play, which will be available internationally, will run from 31 October to 29 November 2020. Tickets can be purchased at whatacarveup.com with audience members receiving a screening link which will activate at their booked performance time for 48 hours. A premium option, consisting of a physical programme and pre-theatre dining recipe card, will be available for UK residents.

The murder mystery is written by Henry Filloux-Bennett (Nigel Slater’s Toast), based on the award-winning novel by Jonathan Coe, directed by Tamara Harvey (Home, I’m Darling) with Harry Smith (Henry V, Private Peaceful) as sound designer and composer, Annie May Fletcher as production coordinator and Holly Piggott as set designer.

Jonathan Coe said of the new adaptation: “I’m thrilled that What a Carve Up! is being brought to the stage by such a talented and experienced team. It’s 25 years since I wrote the book but unfortunately, its political satire seems as relevant as ever. I’m sure the new adaptation will capture that, as well as the novel’s sense of fun and irreverence. I’m looking forward to getting to know it again!”

Tamara Harvey said of the announced casting: “There are some casts so dazzling that my job, as a director, is to not get in the way. This is one of them. My only sadness, of course, is that we don’t get to be in the rehearsal room together. But the fact that these brilliant actors have all agreed to create this piece to raise money for regional theatres is one of the ways we’re all still fighting to ensure that there will still be rehearsals rooms across the country, somewhere, somehow, in our future.”

The recipe card included in the premium option will be curated by world-renowned chef Asma Khan. Owner of the prestigious Darjeeling Express in London’s Soho, Asma Khan was the first British chef to be profiled on Netflix’s award-winning documentary series Chef’s Table and in 2019 was named number one on Business Insider’s ‘100 Coolest People in Food and Drink’ list.

A portion of the proceeds raised by What A Carve Up! will be donated to a freelance fund to support the creative workforce that the theatres would not be able to survive without. The production is kindly supported by Blackmagic Design.

In other good news, The New Wolsey Theatre has been awarded £245,000 from the Culture Recovery Fund distributed by Arts Council England.

New Wolsey Chief Executive Sarah Holmes said: “This is very welcome news indeed and it will be a lifeline for so many cultural organisations across the UK. With this grant, The New Wolsey Theatre has a fighting chance of remaining stable through what is likely to be a challenging six months. The support from this fund means we can continue to develop a re-imagined programme and step up our creative community work. We have a new bounce in our step because the future for culture in Ipswich does not look as bleak as it did on Friday. We won’t be resting on our laurels, but this is a hugely positive step forwards after what has been a traumatic six months for the sector.”

Sir Nicholas Serota, Chair of Arts Council England, said: “Theatres, museums, galleries, dance companies and music venues bring joy to people and life to our cities, towns and villages. This life-changing funding will save thousands of cultural spaces loved by local communities and international audiences. Further funding is still to be announced and we are working hard to support our sector during these challenging times.

“Following the Covid-19 crisis, the Arts Council developed a £160 million Emergency Response Package, with nearly 90% coming from the National Lottery, for organisations and individuals needing support. We are also one of several bodies administering the Government’s Culture Recovery Fund and the unprecedented support package of £1.57 for the culture and heritage sector.”

Comic Masterpiece Heading to The Cut