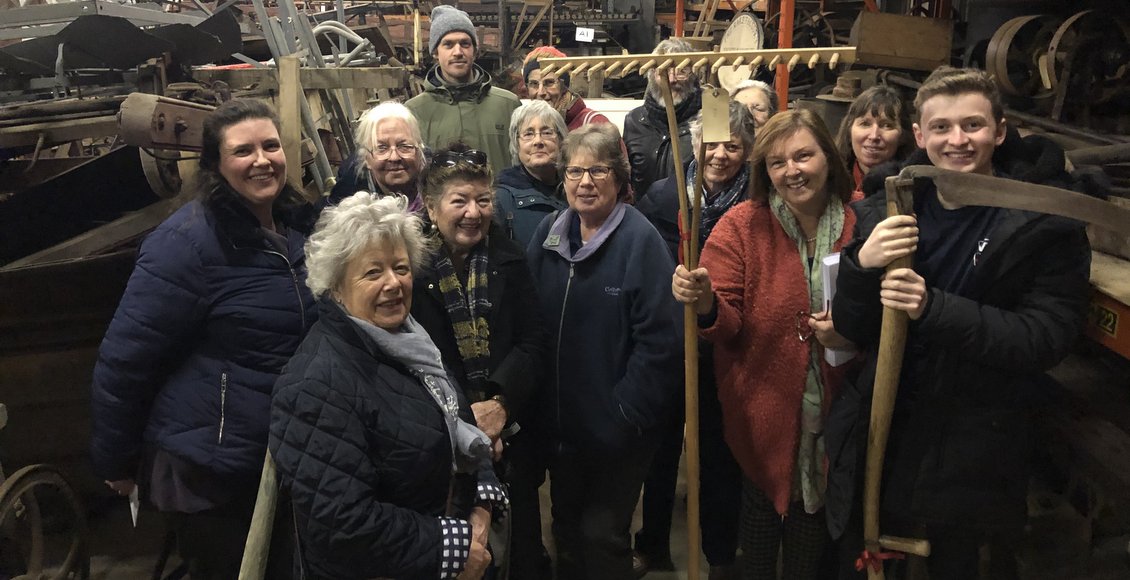 A group of people in Hitcham have had a very different way to keep themselves busy in lockdown. They all volunteered to research the next major exhibition at the Museum of East Anglian Life, Darwin’s Mentor: Walking with Henslow.

Jenny Cousins, the museum’s director explains: “Working at Down House (Charles Darwin’s home), I was familiar with the story of the Rev Professor John Stevens Henslow, an inspirational teacher whose influence is felt nationally and internationally as well as here in Suffolk to this day, yet hardly anyone knows about him. I was delighted that the museum could work with Hitcham as part of their National Lottery Heritage Fund Project ‘Restoring Henslow’s Bells’.

Luckily the group from Hitcham had already been busy working with museum staff before lockdown, which delayed the official opening until the autumn. The extra time for research has been put to good use with plenty of topics worked, from the rick burning riots to Henslow’s life-changing impact as a teacher. Rural Suffolk in the mid-1800s will be brought to life using objects from the museum’s collection. Others are making a short film and devising interactive displays.

Henslow was Hitcham’s rector from 1837 until his death in 1861. Unusually for his time, he moved from Cambridge to live in Hitcham which he found “a populous, remote and woefully neglected parish, where the inhabitants, with regard to food and clothing and the means of observing the decencies of life, were far below the average…in England”.

“Henslow arrived as the social unrest was taking hold in Suffolk,” said Nicola Currie, the village’s project manager. “Researching the rick burning riots opened up a fascinating chapter of Suffolk’s history for me which I knew nothing about. This was a time when nearly everyone worked in farming but commodity prices had plummeted and jobs were being cut as mechanisation was being introduced. Back then people were only paid when they worked, which was weather dependent, there was no regular guaranteed wage. Absentee landlords had pushed up farm and cottage rents and the enclosures removed the chance for the poor to grow any of their own produce. Poverty was rife. This is the time of Dickens’ Oliver Twist. Desperation triggered the rick burning and Suffolk was at the epicentre of this national problem. It was reported that fires could be seen ‘almost nightly’.”

Henslow was passionate about social justice. He was one of the few who spoke out for the poor for which he was heavily rebuked by his peers. He campaigned tirelessly from speaking to Hadleigh Farmers Group to writing pamphlets and letters in The Times arguing for a fair wage. His efforts got Suffolk mentioned in Parliament as Hansard records in 1844.

Ever practical, Henslow set up self-help savings groups. Using his own money and against fierce opposition from local employers, he secured allotments so villagers could grow food and then ran classes and held competitions to help them grow the best. The Hitcham Produce Show continues to this day.

He believed that education was the solution, teaching regularly himself at Hitcham village school. He insisted that everyone, whoever they were and whatever their background, be they Cambridge students like Charles Darwin or Hitcham farmworkers and their children, had potential. He was a man ahead of his time.

“It has been really interesting researching this period of Suffolk’s history,” observed Nicola. “A family who has lived in the village for many generations produced the programme from when Henslow organised an excursion for the villagers on the train to Cambridge. It’s a beautiful thing, illustrated with pictures of the university’s colleges and museums they visited and was all paid for and printed by Henslow. It will be part of the display in the museum.”

“Unable to go himself, Henslow suggested Darwin take the place of captain’s companion on HMS Beagle, and supported Darwin, receiving specimens he sent back from his hugely important voyage,” said Jenny Cousins. “Whilst continuing to care for his parishioners he also helped to found Cambridge Botanic Gardens and later Ipswich Museum, and to teach Queen Victoria’s children. This exhibition will help give Henslow the recognition he deserves.”