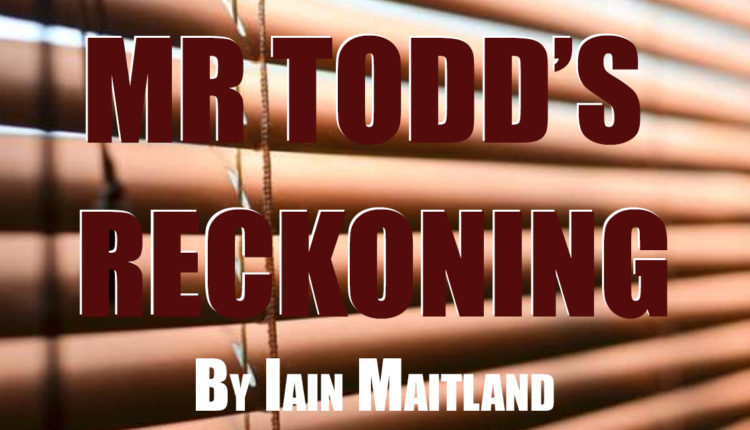 Mr Todd’s Reckoning, described by Geoffrey Wansell in the Daily Mail as “splendidly creepy”, is the story of a father and a son in a normal house in a normal street. They are slowly driving each other insane. One of them is a psychopath…

Mr Todd’s Reckoning is the second thriller by Iain Maitland. The Felixstowe-based author began writing fiction in 2017, following the success of many non-fiction works including a ground-breaking book on mental health, Dear Michael, Love Dad. Silver Dagger-award-winning author Barbara Nadel has praised it as “truly scary, a fabulous dive into the mind of a classic, self-justifying psychopath”.

Martin Carr says: “I’m a horror nut and a huge fan of the genre so devoured Mr Todd’s Reckoning. In this crowded marketplace it’s hard to stand out but Iain Maitland has pulled off a masterstroke. Combining the ingenuity of an Agatha Christie, the horror of Rillington Place and the wit of the best of British, the story keeps you on your toes, fills you with dread and makes you laugh out loud. We can’t wait to bring it to the screen and think the audience will delight in the rollercoaster ride.”

Saraband publishing’s Sara Hunt says: “Iain Maitland has a phenomenal ability to write chilling, disturbed characters while keeping the reader glued to the page. In Mr Todd’s Reckoning he takes us on a speeding rollercoaster ride from a suburban bungalow to somewhere very dark.”

Iain, who is an ambassador for the teenage mental health charity Stem4, says: “Being a huge fan of No Offence and Shameless, I am beyond thrilled to be working with the wonderful creative team at AbbottVision to bring Mr Todd’s Reckoning to the screen.”