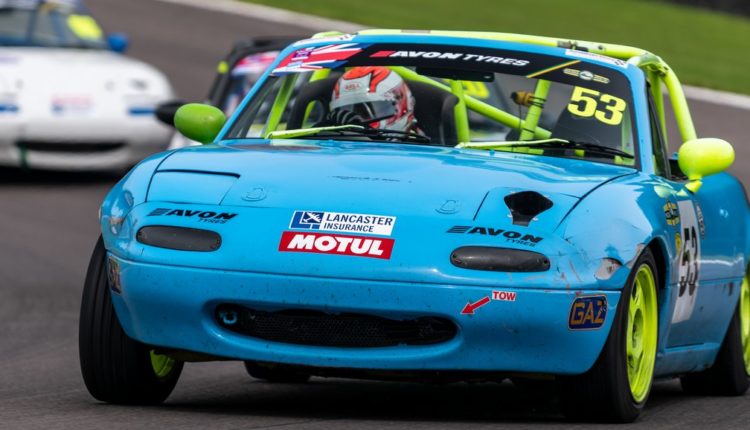 In October 2018, Jonathan Fieldsend (pictured racing at Oulton Park) from Woodbridge underwent a partial corneal transplant at Ipswich Hospital. The procedure saved his sight and he is now supporting Colchester & Ipswich Hospitals Charity’s Eye Appeal by match funding every donation given to it from now until the end of June. He has pledged to match up to £9,000.

The dad of two, aged 50, has a genetic condition called Fuchs’ endothelial dystrophy which causes a swelling of the cornea, the transparent window at the front of the eye. This results in cloudy vision and a lack of depth perception. If left untreated, he would have eventually gone blind. Jonathan isn’t the only family member to have Fuchs’ either. Some of his extended family also have the disease and have undergone the same transplant.

Jonathan (seated l-r with Brian Taylor, Community Fundraising Manager, Dawn Elswell, Head Orthoptist, and Ramy Bassily, Consultant Ophthalmologist) said: “My consultant, Dr Bassily, saved my sight. I can’t begin to explain how that makes me feel. To help the Eye Appeal reach its target is the least I can do. I urge everyone to get behind the appeal as whatever is donated until June I will match. I really hope the charity sees an influx of donations.”

The Eye Appeal is raising £55,000 to fund a portable OCT at Ipswich Hospital. An OCT is a non-invasive imaging machine and has the potential to detect, diagnose and monitor eye diseases early. It will be particularly beneficial to children, wheelchair users and those who are bed bound as these groups of people often can’t access the hospital’s current imaging equipment.

The procedure Jonathan had is known as DMEK surgery and involves transplanting material just 10-15 microns thick onto the back of the cornea. Dr Bassily introduced the technique to Ipswich Hospital in 2017 and it’s a massive improvement on the previous surgical options for Fuchs’ dystrophy. The surgery has literally meant Jonathan can see his two children grow up, as well as enjoy his hobbies of running, table tennis and motor racing.

To support the Eye Appeal and have your donation doubled visit www.colchesteripswichcharity.org.uk/eye-appeal before 30 June 2020.