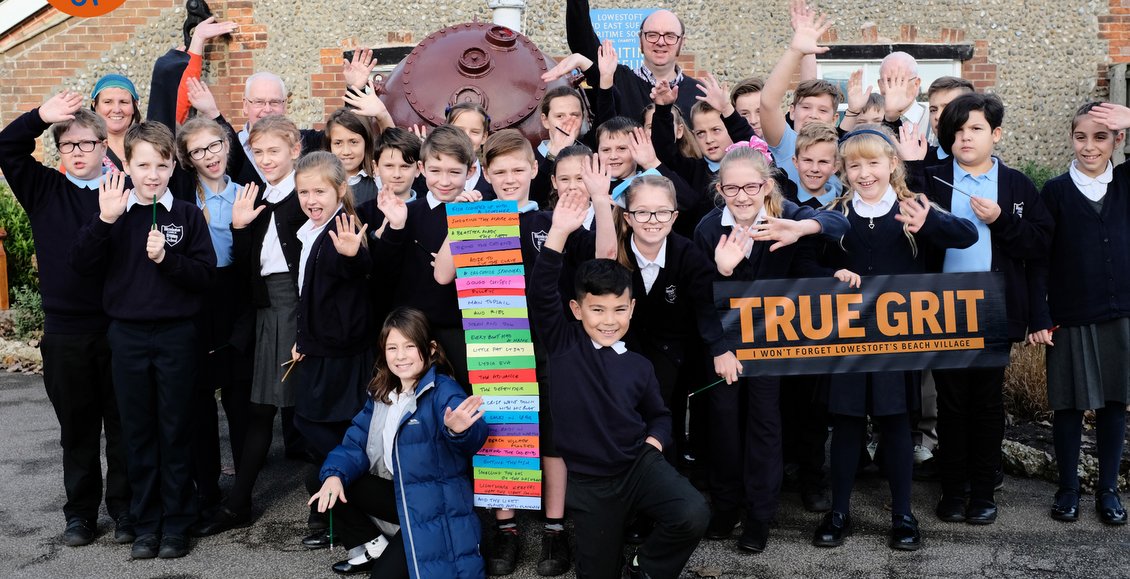 Poetry People has been shortlisted in the new National Creative Learning Awards for The Grit, its community-driven project celebrating Lowestoft’s almost forgotten fishing village. The Grit project – which involved schools’ workshops, GritFest celebration day and the touring theatre show ‘Pearls from The Grit’ – is one of three national projects on the shortlist for the Literature and Creative Writing Award.

Lowestoft-born poet and writer Dean Parkin is the co-founder/director of Poetry People. He said: “I’m thrilled that The Grit has been shortlisted for this prestigious award from the many entries the Creative Learning Guild received. Nothing would have been possible without the support of hundreds of Lowestoft people, young and old alike. Their responses to the workshops, the celebration day and the touring show have been incredible. Lowestoft is so passionate about its history! And now stories about the fishing village are being relished all over Suffolk.”

Gilly Bryerley, Managing Director of The Creative Learning Guild which is organising the awards, said: “On behalf of all here, I would like to offer my heartfelt congratulations to all of those shortlisted for the National Creative Learning Awards. There is so much talent and dedication in the world of creative learning, with practitioners taking on enormous responsibility, working long hours with almost no down time, and often for little financial reward. We want these awards to recognise these un-sung heroes and support them in their ongoing fight for creativity.”

The Grit project comprised a series of activities and events in 2017-2018. Creative writing workshops with 220 children took place in eight primary schools, plus reminiscence sessions with 64 residents in six local care homes and sheltered housing. GritFest celebration day in Sparrows Nest Park was attended by over 2,000 people last May. And ‘Pearls from The Grit’, a new live theatre show written by Dean Parkin and professionally directed and acted, toured Suffolk last autumn delivering nine performances attended by 1,200 people. A local history teaching resource for primary schools and a permanent Maritime Museum installation have also been created.

The new national Creative Learning Awards celebrate the inspirational innovators, educators and practitioners who live and breathe creative learning. The awards range across 15 categories, including formal education, the arts and creative business. The winner in each category will be announced at the Creative Learning Summit in Halifax on Friday 8th of March. The judging panel include an Olivier award winning theatre producer, a representative from the international Lego Foundation, leading disability arts professional Ruth Gould and acclaimed poet and broadcaster Ian McMillan.

The Grit was supported by a Heritage Lottery Fund grant, in partnership with the Lowestoft & East Suffolk Maritime Museum and Lowestoft Rising. The legacy of the project will continue in 2019 and beyond. There are plans to hold another GritFest-style celebration in 2020, and Dean Parkin is busy revising the best-selling book, ‘The Grit’, which he co-wrote with the legendary Jack Rose over 20 years ago. The new edition will be published in autumn 2019, to coincide with a planned second tour of ‘Pearls from The Grit’ to new venues further up the East coast.