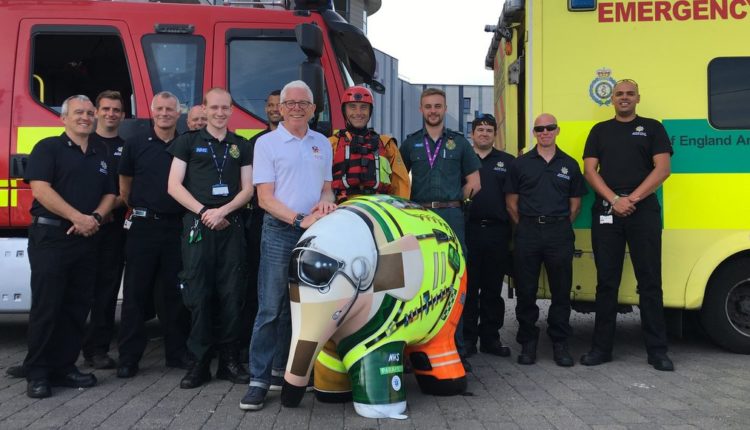 The Elmers have marched out of town!

Auction partners Clarke & Simpson kept the packed room of bidders enthralled, while also receiving bids from people registered online from all around the world. Top seller, Castle on the Hill, the Ed Sheeran inspired sculpture, went for an impressive £10,000 marking the highest price for any of the 56 sculptures.

In an added twist at the end of the night, Hero, the trail’s emergency Elmer, sold for £6,000 thanks to 12 generous people who all agreed to donate £500 in order to donate him to St Elizabeth Hospice.

Norman Lloyd, Campaign Manager for Elmer’s Big Parade Suffolk, said: “What a night we had! We are really pleased with the total raised; we had set our sights on beating our Pigs Gone Wild total so are thrilled to have more than achieved that.

“It was also really humbling to see the contributions offered up for Hero; now we can bring him home to be with our real hospice heroes, as well as Dr Trott and Nurse Honey-Cured of course, who already resides in the garden following our previous trail.

“This campaign has been a true team effort and we are indebted to all those who have contributed, whether that be financially or with their valuable time and effort.”  Elmer’s Big Parade Suffolk was St Elizabeth Hospice’s second art trail, organised once again in partnership with Wild in Art, as well as new partner Andersen Press. The sculptures were out on parade from Saturday 15 September until Saturday 7 September 2019 and the auction took place on Thursday 3 October. It followed the successful ‘Pigs Gone Wild’ art trail in 2016.

Sherlock Holmes & The Warlock of Whitechapel