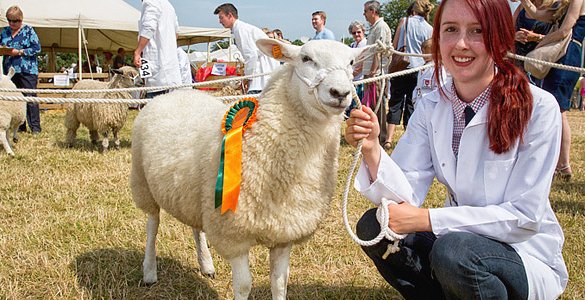 Now established as one of the largest one-day events in the region, today’s show is unrecognisable from the event that first took place in 1899 at Thorpe Hall, as a cattle show and ploughing match. The show attracts more than 21,000 visitors from across the region every year and is only made possible by the time and commitment of over 200 volunteers.

The 2019 show president is local dairy farmer, Philip Smith, following in the footsteps of his grandmother, who was president back in 1966 and his father, Andrew, president in 1992. It is fitting that the show’s main theme will be ‘The Delights of Dairy’, focusing on dairy themed ‘hands on’ activities, including a live milking parlour. Philip explained: “Dairy farming in the eastern region has a proud history. Visitors to the theme area at this year’s show will have a chance to see first-hand what we do as dairy farmers and the wide variety of dairy products we are responsible for producing and consumers enjoy.”

Animals are a highlight for many visitors. There will be an array of showing classes for horses, cattle, sheep and goats, culminating in a Grand Parade of Livestock in the President’s Ring, the first time the Grand Parade has taken place for over 20 years, and a great opportunity for champion livestock exhibitors to show off their winning animals.

By contrast, another first for the show will be Jason Smyth’s Adrenaline Tour. Jason is an ex-world championship moto-cross rider and will bring a main ring display crammed with spectacular tricks on his quadbike.

There will be more than 250 trade stands and exhibitions to visit this year, and the show organisers are delighted to confirm that trade stand space for the main showground was fully booked by mid-March, which is hugely encouraging and testament to the popularity of the show.

So, whatever your interests, the Tendring Show is certainly the worth a visit.

For further details about this year’s show, and to purchase e-tickets, at a reduced rate, as well as claiming a free child’s ticket, visit, www.tendringshow.co.uk.