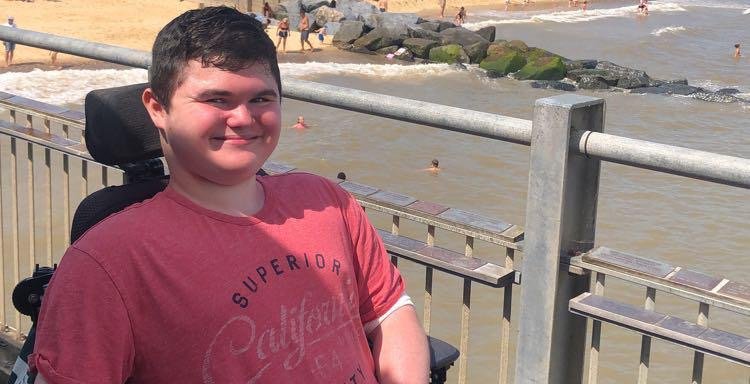 A teenage boy who has been stuck in bed since Christmas after his wheelchair broke has appealed for help regaining his independence.

Miles Alder, who suffers from a genetic muscle wasting condition called Duchenne Muscular Dystrophy, needs £20,000 to pay for a new electric chair and to mark International Wheelchair Day has launched a crowdfunder asking people to help him pay for it.

“I try to live my life to the fullest,” he said. “But without a chair I can’t go and see friends, walk my dog or even pop to the shops – tiny things that other people take for granted. I’m afraid I can’t even manage to take myself to the bathroom which is very distressing for someone like me who has always enjoyed my independence despite my medical condition.”

The 19-year-old, a former pupil of Farlingaye High School, lives with his family in Woodbridge.

His mother Catherine Jacobs said: “Miles is a bright, charming teenager who needs to use an electric wheelchair to go everywhere. Before Christmas, Miles thoroughly enjoyed getting out of the house and would get involved in any activities he could. He’s incredibly sociable and loves to do everything normal teenage boys do.“

“His wonderful old wheelchair broke down on Christmas Eve after giving him many years of comfortable independence. But now he can no longer sit at a restaurant table or even enjoy a trip to the shops which means that for the last two months he has been mostly confined to his bed.”

Miles has had temporary access to an NHS wheelchair but because of its design, it does not allow him to complete basic daily functions for himself – such as using the toilet independently and feeding himself. It also causes him extensive pain in his hips, pelvis and back so he can only tolerate it for 15 minutes at a time.

Catherine said: “His previous chair gave him complete independence but the NHS one means he needs hoisting on to his bed, help undressing, washing and using the toilet – all things he could manage before Christmas. He has also needed help with eating simply because the chair does not allow his hands to reach his mouth without a table to rest his elbows on and yet often it won’t fit under the table to facilitate this. As you can imagine, it’s all very embarrassing and distressing for him because it’s the wheelchair restricting him right now rather than the muscle wasting condition.”

A wheelchair, manual or powered, can cost anything from £2,000 right up to £25,000, depending on the individual’s needs. The chair that offers Miles the most independence costs £19,236.

Catherine said: “Disability charity Scope recently released a report highlighting that people with disabilities are already experiencing on average extra costs of £583 per month – equivalent to half their income – compared to able-bodied people. It’s vital that more financial support is given to those in need of a wheelchair. We hope Miles’ campaign highlights this issue with the general public who might feel moved to help him.”

March 1st marks International Wheelchair Day – an annual day of events and activities which take place around the world when wheelchair users celebrate the positive impact a wheelchair has on their lives. Since it was first launched in 2008, celebrations have taken place in Australia, Nepal, Senegal, South Africa, Bangladesh, Pakistan, United Kingdom and United States of America.

Home Is Where The Dance Is