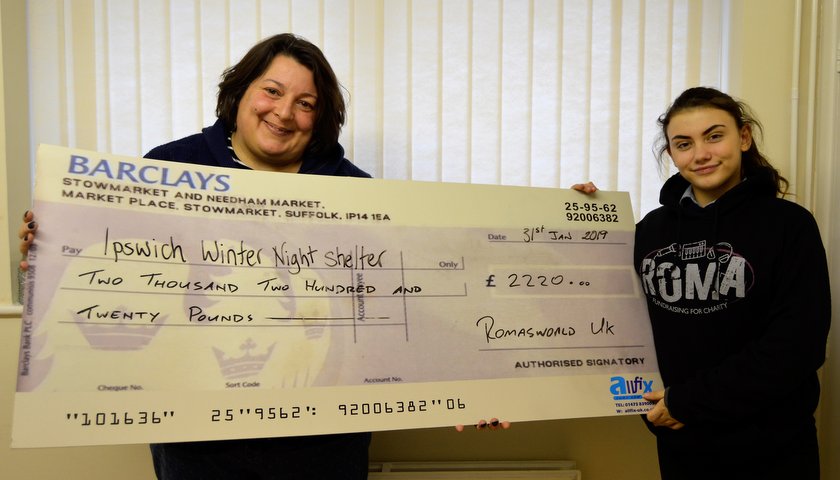 Singer songwriter Roma aged 13 handed over three cheques each £2220 to three local charities as a result of her fundraising in 2018.

During January, Roma visited all three charities and handed over cheques and had a tour of Treetops Hospice too.

Since June 2017 Roma has raised over £11,100 for local charities and this won’t be stopping anytime soon. An open mic UK 2018 finalist and appearing at Ipswich Music Day and Felixstowe Carnival last year, Roma is excited of what 2019 will bring.

“The recent launch of my new album Teen Spirit will mean I’ll be out in 2019 at events raising yet more money for charity” said the Northgate High School public, who has already raised £427 in January thanks to the generosity of The Railway Pub Ipswich.

“This year I’m fundraising for 4yp as they are a charity that helped me when I went through bullying and they are a wonderful charity that do so much for teenagers to help them with emotional and physical wellbeing.”

Roma has sent herself a target of raising £2000 for 4yp and will be performing at the Smokehouse at the Girls do Music III event alongside Lekenah, Gabby and Louisa Falconer on Thursday 28th March 2019

You can follow Roma on social media www.facebook.com/romasworlduk to keep up to date what she is doing. Her album Teen SPirit is available to download on Spotify, Amazon music, iTunes and all online platforms. All sales proceeds go to charity.