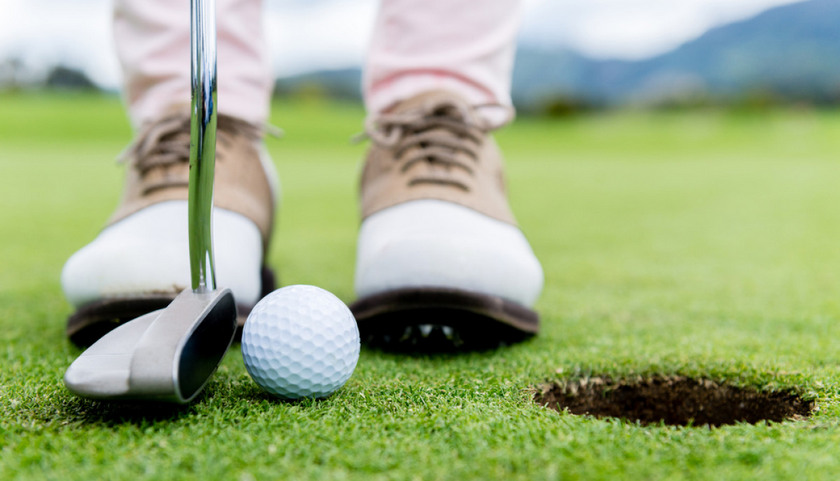 Brett Vale Golf Club, July 2017, Club Championship Day. Returning trophies currently in their possession, Alan Farnish with the winner’s trophy held for the past two years and Shaun Vincent with the Golden Boot, won at the past two events. Only one was keen to win ‘their’ trophy for a third consecutive time!

Alan, clearly up for the challenge had mistakenly arrived two hours early, a great opportunity to spend some time on the practice ground and putting greens, honing his skills for the afternoon ahead. On this overcast morning, with the bar open, a comfy leather sofa and a TV showing live coverage of the Open Championship, there was an alternative way of killing time – what a conundrum.

Thirteen players meant odd numbered groups, but mattered little as this was purely about individual scores. It was also nice to be joined by Rob Earey and Terry Lawrance, who don’t get to join us as regularly as others due to weekday work commitments. In the first group out, Alan started the round on fire, scoring pars and birdies in the first five holes. Watching the pros earlier must have inspired his game (or was it the IPA?). The remaining holes were not so successful putting paid to a third championship for Alan.

Paul Challener was also scoring well on the front nine, but perhaps he got distracted after nearly being hit by stray golf balls from a group behind them, not only on the eighth but also the 10th. Mike Mann had a strong round including a great approach shot on the 15th, hitting the flag from 135 yards out. Not to be outdone, playing partner Simon Fisher scored a birdie three on this low index hole scoring him five points – this acquired him some stick in the clubhouse. Another player also scored three for five on the 11th hole but this appeared to have passed unnoticed.

Rob had joked that the last time he had played it was crazy golf; his skills came to the fore on the 10th where a brook bi-sects the fairway. Players have a choice of a mighty hit to carry the water or lay up in front of it – Rob was cunning however and guided his ball across the footbridge instead.

With captain and vice absent, it was Steve Brock who announced the results back in the clubhouse. This followed a precis of prize funds at recent sporting events such as Wimbledon, The Open and the Tour de France.

There were two NP competitions with Simon Fisher getting closest on the fourth, but nobody managed to hit the green on the 10th. Alan won the Longest Drive prize at the 15th. This was apparently the highest set of scores at a HOGS event for a long time with seven players scoring in the 30s.

Rob beat Terry Aldis to the Golden Boot, by a whisker and Mike Mann secured third place on countback, ahead of Nick Medlen. This left two players under par for the day, Chris Mann finishing runner up to newly crowned champion Shaun, some turnaround from his previous two outings.

Let’s see what form he displays at their next event at Seckford Hall, their last event before their 13th tour of France in September where, having analysed recent form, Steve predicts a new name will be on the trophy.

The Little Journal of Kindness