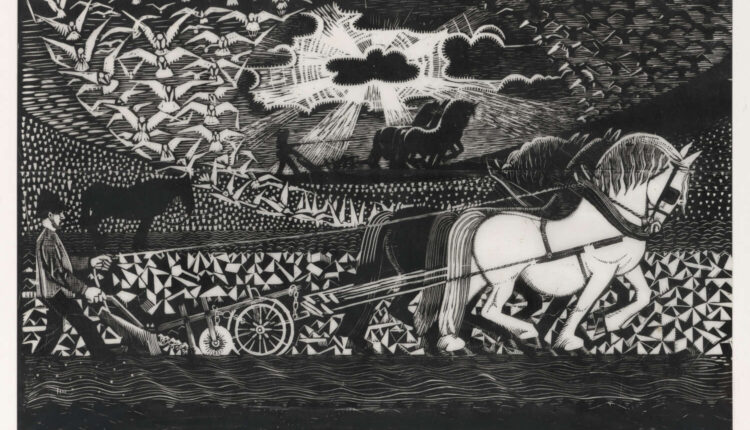 Hadleigh Old School held its first outdoor event on April 9, socially distanced around our fire pit in the wild garden. Indoor shows may resume when government rules allow. We were privileged to host a large collection of important artwork in April and, as the public was unable to visit, we share the details here.

Cor Visser (1903-1982) was a leading light in the Suffolk art world and was invited to join Ipswich Art Club by Anna Airy (remembered today for the annual art prize in her name). Cornelius (commonly referred to as ‘Cor’) was born in Spaarndam, Holland and became famous as the wartime portrait artist of the Dutch Royal Family.

In his youth, Cor was a student alongside the world-famous conceptual artist Maurits Escher, known for his impossible graphic Relativity with gravity-defying staircases. Both trained in woodblock cutting under Samuel Jesserun de Mesquita. Pictured above is Cor’s woodcut of a Suffolk Punch horse ploughing, a very early hand-printed piece. Copies of this work can be found in the V&A Museum, London.

Cor also painted the Prettys, best known for hosting the Sutton Hoo Dig, and made a coloured drawing of the burial ship. At the end of the excavation period, Edith Pretty commissioned Cor to paint portraits of both herself and her son David. In his painting, generously donated to the National Trust and now on display in Tranmer House, David is depicted clutching a toy ship.

The Cor Visser collection came to Hadleigh Old School for cataloguing and cleaning in March and April 2021, before shipment abroad. We were unable to welcome visitors due to the enforced government closure of all art galleries, but a couple of local artists shared their recollections. Cris Coe, of Chattisham, recalled being taught by Cor when she and her father went to a class in Ipswich, near Tower Ramparts, when she was aged 15. She was impressed by his fine graphic portraiture and Cris has developed her own style of life studies, including using charcoal. Some were shown at Hadleigh Old School in September 2020.

Ashe Freya Ericksson, the painter, children’s book illustrator and former student of Benton End, also recalled Cor as a rather romantic figure lurking around Ipswich docks when they were grey places back in the day.

For many years, Cor lived on barges and boats including the ‘Emmy’ yacht moored in Woodbridge. Maritime works were frequent subjects in his paintings and drawings. A watercolour of ‘Barges on Pin Mill Hard’ was in the collection; this was previously exhibited at the centenary of Ipswich Art Club in 1974, and again at the Anthea Du Rose retrospective in 1983. Anthea recalled that when Cor painted Queen Wilhelmina, the longest-serving Dutch Monarch, he depicted her in a lace collar – more ordinary attire than the usual royal regalia which added to her popular appeal among both wartime resistance and even Republicans.

For those wishing to see a Cor Visser, the Ipswich Museums service collection includes the painting ‘Waterside Works, Ransomes and Rapier’. This and other works are sometimes on display at Christchurch Mansion. A self-portrait woodcut is held in the National Portrait Gallery collection in London