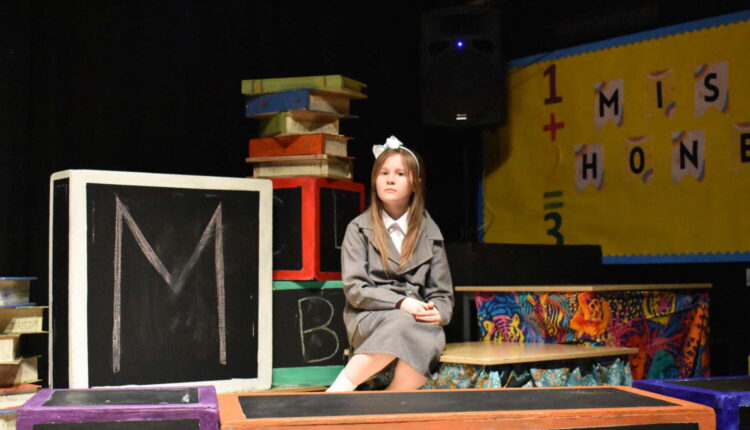 Theatrical students at a Suffolk high school have staged a production of Roald Dahl’s classic Matilda.

Children from Stowupland High School, which is part of the John Milton Academy Trust, have been busy rehearsing since September, learning their lines and preparing for the show’s premiere.

Katy Pollard, Teacher of Drama, said: “The students have been amazing and have really risen to the challenge.

“The production started back in September when we held open auditions.

“We had around 20 students audition for Matilda and some of the other key roles.

“Chiarah Ruby-Budd, who plays Matilda, sings beautifully and has such amazing vocal expression.

“And our Miss Trunchbull, Isabella North-Fields, really commands the stage – her face is so expressive.

“Those performing in the production have been brilliant and have really enjoyed getting up on stage.”

The students’ involvement in the production doesn’t stop at the cast, as everything from lighting, sound to set changes is being crewed by students.

“We think it’s really important that students who don’t want to be up on stage can take part as well, said Ms Pollard.

“When I was at school, although I also loved performing, I was fascinated by the lighting, the sound and the set design first.

“We like to offer students the opportunity to take on those roles too.

“We have a Year 7, for example, who is doing our lighting pretty much by himself, supervised by a Year 12, who also did the lighting when he was in Year 7.”

Following dress and technical rehearsals last week, Matilda was first performed to pupils from Bacton, Mendlesham and Freemans Primary Schools, before staging several performances through the rest of the week.

Executive Headteacher Peter Whear got the chance to see the show on the opening day and the final night.

“It was brilliant,” he said, “I was blown away by how good it was.

“The cast were fantastic – we have some very talented actors here at Stowupland High School.

“And the students doing the work backstage were amazing, they have worked so hard to make sure the show goes as planned.

“Well done everyone who took part.”