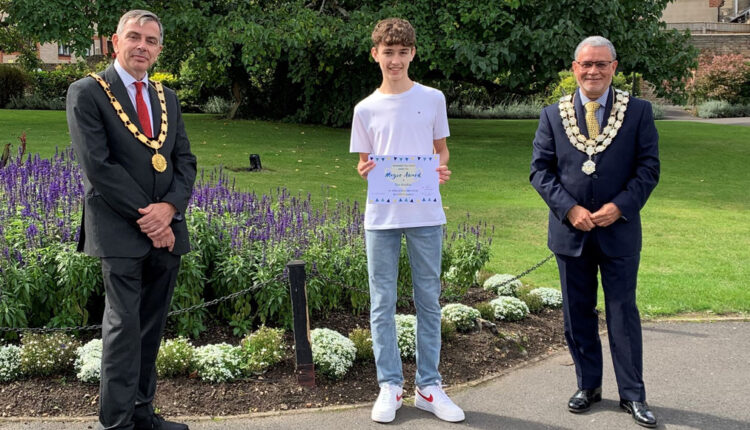 Thank you to everyone who submitted a nomination to the Mayor Awards COVID-19 edition. We were overwhelmed by the number of nominations we received and it was heart-warming to read about all of the amazing things the people of Stowmarket have been doing during the outbreak.

The aim of the awards was to celebrate the selflessness and resilience of local community members during this unprecedented global event. Stowmarket Mayor, Paul Ekpenyong, and Deputy Mayor, Keith Scarff, had a wealth of nominations to choose from but managed to whittle it down to three deserving winners. The Town Council Communities Team also chose two further nominees to win the Communities Team Choice. You can see the winners below and read their inspiring nominations.

Sam Kitchen (pictured above)
Nomination: “Sam is 14 years old and a student at Stowupland High School. For the past year and a half he has been doing a morning paper round. Every morning, even in the worst weather, he sets his alarm. During lockdown he worked a double paper round and has also been doing odd jobs for an elderly resident, David. Sam is a kind and caring young man who has a good work ethic and sense of community. Sam is now a firm friend of David and recently spent David’s birthday with him. I believe that Sam has made a positive impact for a lot of elderly residents of Stowmarket who have been socially isolated due to the lockdown. Sam has a smile and a wave for everyone.”

Anna Damigella
Nomination: “Anna is the Principle of Bravo Theatre workshop and has been organising free Zoom classes in dancing, singing and acting for children age three to 18. Three sessions have been run each Friday with different musical themes each week. This has been amazing for the children to be able to keep that sense of community whilst not being able to see each other. The first thing to go would be a club or hobby when parents are struggling with money during these times so making it accessible free of charge has really made a difference to them.”

Jane Page
Nomination: “Mrs Page has been outstandingly supportive to all of her neighbours. I am 81 and I lost my wife four years ago. I have disabilities so because of the pandemic I wasn’t able to see my children or grandchildren. Loneliness can be a killer. I do not know how I would have managed without the help from Jane; visits, phone calls, food (she is a brilliant cook). If needed she was there, as always. She was there for any other neighbours needing help. She gave assistance to many and never sought anything in return.”

Gillian Macey
Nomination: “From the word go, despite having her own family to look after, she has been determined to provide us with practical and emotional support to help shield a family member who falls within the clinically extremely vulnerable group. At the very start of lockdown, completely unexpectedly, Gillian texted to say she’d been to Tesco and got us ‘a few bits’, as she ‘didn’t know how much food’ we had. She promptly left two bags on the doorstep packed to the brim with very carefully selected essentials, pretty much all you need for a week; food staples, toilet rolls, bleach, soap, laundry detergent and so on, even hand sanitiser! This at a time when booking a food delivery slot was virtually impossible. We were amazed by her thoughtfulness and incredibly grateful.

After that, Gillian regularly texted to see if we were OK and ask if we needed anything, ‘anything at all…it’s no trouble’. She went out of her way to bring whatever essentials we were short of, while making her own thoughtful additions such as strawberries, the TV guide or newspaper. At Easter, we received hot cross buns and her gift of chocolate bunnies. As lockdown began to ease, Gillian brought top-ups of hand sanitiser and face coverings she’d sourced from Stowmarket Town Centre. To our family, she couldn’t have done more: she is one in a million!”

Regal On The Road