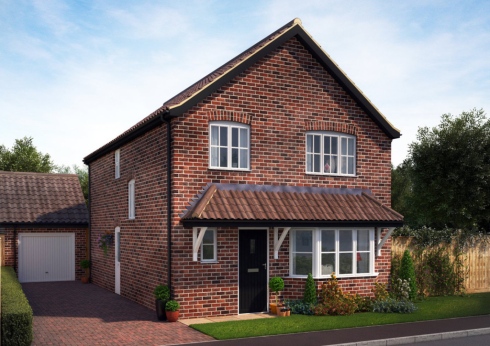 Detailed plans for 305 new homes in Sproughton received the go ahead on July 10, providing 61 affordable homes, allocation of land for a new primary school and public open space.

Applicant Taylor Wimpey sought outline planning permission for the development of land to the north and south of Poplar Lane for up to 475 homes, with this being granted by Babergh District Council’s planning committee in February 2016. Construction began on the first phase of proposals, totalling 145 homes and granted full planning permission, later that year.

The second phase of development, finalised on July 10, includes the provision of 61 affordable homes ranging in size from one to four bedrooms – meeting the need of both current and future generations.

Proposals also offer public open space, including children’s play area, trim trail equipment and allocation of land for a new primary school. In addition to this, the development will incorporate almost ten acres of land for business purposes, encouraging local investment at a time when this is more important than ever.

The developer has committed to funding highways improvements to the A1071 Poplar Lane, with planned works agreed under construction phase one being rescheduled earlier this year, as a result of health and safety concerns arising from the Coronavirus pandemic.

The council’s chief planning officer used emergency delegated powers to sign off details of the second phase of construction in the absence of regular face to face committee meetings due to the COVID-19 outbreak. Work on site is expected to start later this year.

Cllr Peter Beer, Chairman of Babergh District Council’s Planning Committee, said: “I fully support the decision made by the chief planning officer today to finalise details for this development.

An application of this size is never decided on lightly, with outline planning permission being discussed at great length by Babergh District Council’s Planning Committee before approval was granted. I agree with the conclusion Councillors reached, and the benefits of allowing this allocated site to come forward promptly far outweigh any potential harm – and will help support our local economy.

The development will not only bring a substantial amount of affordable homes to the area, allowing local people to stay local, but will also provide much needed community facilities – future proofing against expected population growth, and supporting the council’s commitment to ensuring bright and healthy futures for our thriving communities.”

A Boost For Jetty Lane