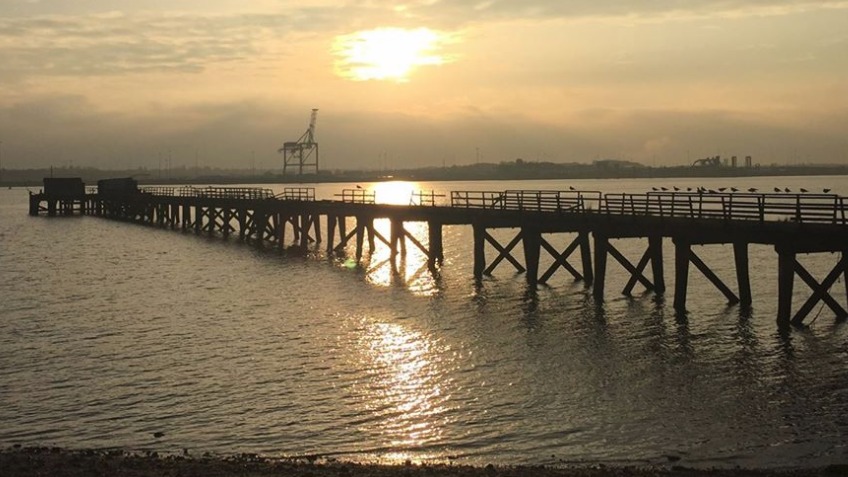 We have come so far in the last three years, from raising interest in Shotley Pier within our community, deciding on a name, setting up communications, raising funds, securing grants, holding meetings with our shareholders to help us with planning to securing professional services and seeing our efforts rewarded with the actual reconstruction of the first phase the opening of Pierside Snacks, not to mention the development of our unique Shotley Pier Rum (which is still available at Hollingworth’s in Chelmondiston).

Our monthly art coffee mornings at The Red Lion in Chelmondiston and our summer art and craft event at Shotley Church have been suspended until restriction are lifted and we can review the situation, though we hope, given how vital these events are for our local community, that they can return soon.

We now have our story to add to the stories and photographs we gathered since this project began. We discovered that we were Suffolk’s first Railway Pier, with mail being delivered from Harwich. The pier was used for the delivery of munitions during the First World War and there are many stories of its use during the time of the HMS Ganges land-based Royal Naval Training School. There is also evidence of many pastimes having taken place on the pier over the last century.

Steve, who is retired now, told us: “I was a Detective Constable based at Clacton Police Station and ran the Clacton Police football team which would play friendly matches on Wednesday afternoons. We would play occasional matches against the staff at HMS Ganges and travelled to Harwich Navy yard by police personnel carrier driven by a non-playing, non-drinking designated driver. Further transport, organised by the Harwich Detective Sergeant, would see us board a Pilot cutter and we would sail across to Shotley Pier. Even this short distance made some of the lads queasy!

“The match would be played, with us normally on the losing side, after which we would be royally entertained in the mess to tea and copious quantities of alcohol. Come time for the return journey, we would be escorted back to the boat where we attempted to re-board the vessel without falling between the pier and the boat. Thank the Lord for Shotley Pier without which we would have probably attempted to wade ashore!”

Val, who is now 70 said: “I have such fond memories of catching the ferry across to Harwich from Shotley Pier when I was a child. I think we then walked into Dovercourt for the beach. I remember going down steps at the side of the pier to a platform that rose and fell with the tide. There may have been two of these and, according to the state of the tide, you either used the one closest to land or the further one if the tide was low. It’s a lovely old pier. I would love to see it restored and maybe walk on it again but I’m 70 now, so you’d better hurry up!”

People who have sponsored planks told us why they wanted to support us:

FURTHER NEWS
The HMS Ganges Association and the Pier Group will be arranging a permanent memorial on the pier in the next section of renovations between Bent 6 and Bent 10.

Follow us on Instagram! Darren Taylor, our new volunteer, has created our
new Instagram page, @shotleypierthruthelens. His photos are striking and will create a lovely set of memories for us.

Steve Trumm continues to create amazing drone footage for us. The latest one is less than two minutes and shows the stroll on the renovated section up to the 98 feet point and the next section awaiting renovations. Have a look at his YouTube channel, Steve Trumm Film Productions, or the Shotley Pier Facebook page.

We are continuing to collect memories and stories about the pier, so please send your recollections to: [email protected].