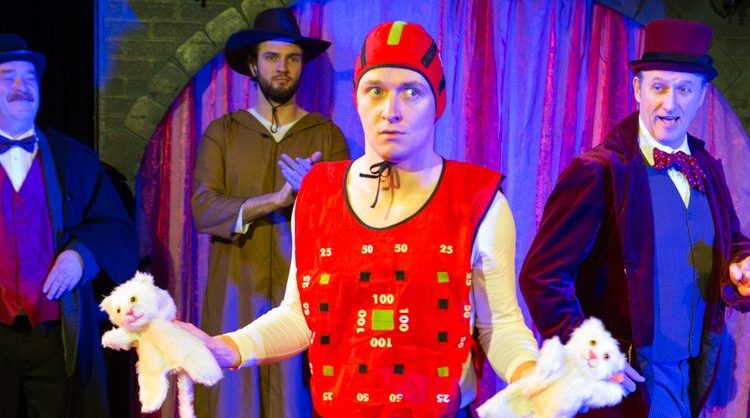 Sherlock Holmes & The Warlock of Whitechapel

Julian Harries & Pat Whymark , the creative team behind two Xmas shows in the Eastern region last year – Eastern Angles’ The Fenland Screamers and Common Ground’s The Scarlet Pipistrelle – return this year to the rich dramatic seam of Arthur Conan Doyle’s most famous creation, to bring you another classic Xmas comedy thriller with Sherlock Holmes & The Warlock of Whitechapel from Common Ground Theatre.

“Who’d be interested in this old relic, Holmes?” murmured Watson, one morning at the breakfast table of 221b Baker Street. “Nonsense, Watson. A splash of cologne and a trim of your moustache, & I’m sure someone would have you”. “Be serious, Holmes. Look here – in the Morning Post!”

Thus began the case that Dr Watson dared not share with the public, till now. A case that, were its full facts to be known, would shake the nation to its very core, and beyond.

Ancient artifacts are disappearing from museums and private collections all over Europe,. A pre-Christian effigy one day, a shamanic totem the next, a pagan fetish at the weekend. Either someone’s on their own personal antiques road trip, or they’re trying to summon dark forces. and gain mystical powers. But to what end… and why?

The ensuing adventure takes Holmes and Watson from the wharfs and alleys of East London, to the icy wastes of the north and the hidden temples of the east (changing at Peterborough), as they pursue “The Warlock of Whitechapel”

Featuring a take on the beloved characters created by Arthur Conan Doyle; with Julian Harries as Holmes & Dick Mainwaring as Watson, it means Julian and Dick continue their long-standing acting partnership – stretching from The Unexpected Guest at The Wolsey in the mid-90’s, right through to this year’s Common Ground’s autumn tour, A Sidecar Named Despair! The cast also includes Common Ground regulars Joe Leat, Emily Bennett and Roger Parkin, who last appeared with us in The Phantom Bantam of The Opera.

For more information or to book commongroundtc.co.uk.

Proceeds to St Clare Hospice, supported by The Rotarians of Kelvedon Hatch & Villages.

Landscapes Are For Life!

The Elmers have marched out of town!