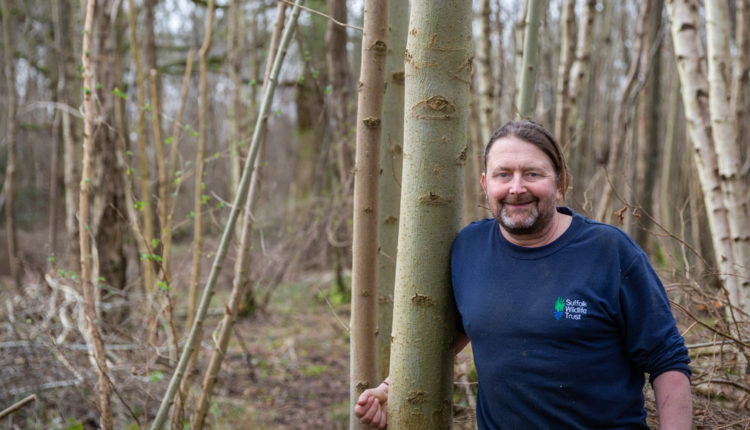 Wood from a medieval coppice will be used to create the oars for a reconstruction of a Saxon ship.

Branches from ash trees in Bradfield Woods, a site of special scientific interest between Bury St Edmunds and Stowmarket, have been donated to the project which will see the 90ft Sutton Hoo vessel rebuilt in Woodbridge, beginning this year.

The gift was made by Suffolk Wildlife Trust which is also providing Goat Willow grown at Redgrave and Lopham Fens and Lackford Lakes for the wooden nails on the ship.

Giles Cawston, woodlands warden, said: “Bradfield Wood has been managed since medieval times and the shipbuilders wanted to use wood that had been grown as closely as possible to the way wood was when the original vessel was built.

“I spent some time with the shipwright searching for straight ash limbs which would be perfect for the oars.

“Our ash trees are under threat from ash dieback disease, and sadly we are expecting to lose 90% of the ash at Bradfield in the next five to 10 years due to the disease.

“That is why we are so thrilled to be involved in this project that will give the ash a legacy.”

Philip Leech, director of the Sutton Hoo Ship’s Company which is working on the project, said he was delighted that the wood was coming from a place so close to home.

“The build is an extraordinary feat which brings together archaeologists, historians, experts in shipwrighting and a large team of volunteers to re-create a ghost ship.

“The discovery at Sutton Hoo is arguably the most fascinating – and important Saxon haul of treasure in the world and the imprints left there of the huge King’s burial ship have resulted in much speculation about how it was made, rowed and sailed.

“We are now set to find out – beginning with our digitally produced plans from the original measurements to reconstruct the ship and sea-trial it.

“To do this we need to create 84 oars – three sets of 28 – and the ash from Bradfield Woods will do the job perfectly.”

The £1 million project is being paid for through a public crowdfunding campaign which allows people to sponsor parts of the ship.

Each oar costs £1,000 and each sponsor will have their name stamped into the wood.

Supporters of the project can also sponsor one of 4,000 individually numbered rivets for £20 each.