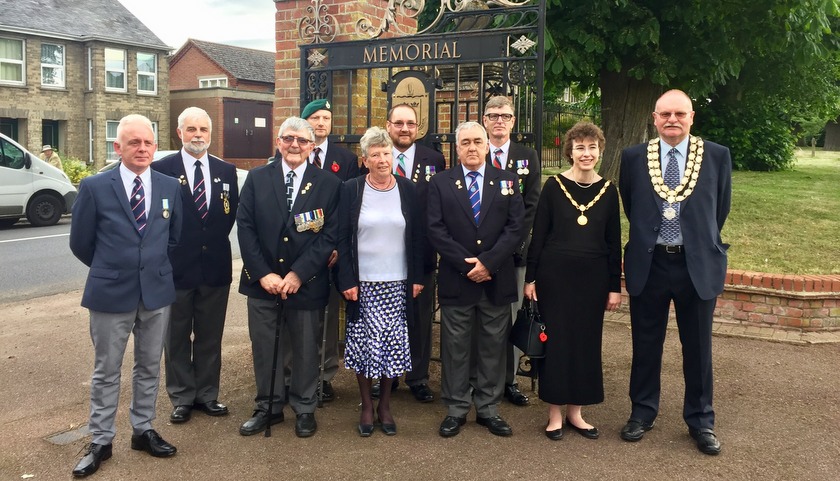 On Friday 16th June, more than 100 people attended a Service of Commemoration at Stowmarket’s St Peter and St Mary’s Church to mark the end of the Falklands War 35 years ago in 1982.

The war, which saw 74 days of bitter fighting to re-take the islands after Argentina had invaded in a dispute over sovereignty, resulted in 255 British servicemen, three Falkland Islanders and 649 Argentine servicemen killed in action. There were an additional 777 British and 1,188 Argentine non-fatal casualties.

Attending the service, were a small group of Falklands War veterans, who found themselves amongst a naval task force dispatched to the South Atlantic to engage the Argentine Navy and Air Force, before the successful amphibious assault could take place. Pete Chivers, who was with the Royal Navy, gave the first reading, with Lidda Luxton, a Falkland Islander, who now lives in Stowmarket, giving the second reading.

Following the service, the congregation, along with 12 ex-service association standard bearers, escorted by sea and air cadets, made their way to the town’s Memorial Gates to lay wreaths and observe a minute’s silence. Stowmarket born Nick Huffee laid the South Atlantic Medal Association wreath, which was particularly poignant as he was serving on HMS Glamorgan during the conflict when it was hit by an Exocet missile, killing 13 member of the crew.

Lidda Luxton, who during her time on the Falklands hosted many veterans visiting the islands on personal pilgrimages, said a few words about the continuing gratitude felt by islanders to all those who had sailed 8,000 miles to the South Atlantic and unselfishly liberated the islands from its invaders and upheld its right to self-determination.  From the sea came freedom.

A buffet was then held at Stowmarket’s Royal British Legion Club where a candle was lit to remember absent friends before Councillor Dave Muller, Stowmarket Town Mayor, spoke about his own personal recollections on having seen the task force sail from Portsmouth in 1982.

Proceeds from the sale of remembrance booklets and a raffle raised more than £500 for the South Atlantic Medal Association charity which continues to care for veterans of the war and their families. In the phot, you can see Falkland Islander Lidda Luxton (front and centre) with veterans of the Falklands War at Stowmarket’s Memorial Gates with Stowmarket Town Mayor, Councillor Dave Muller with his wife Lois.