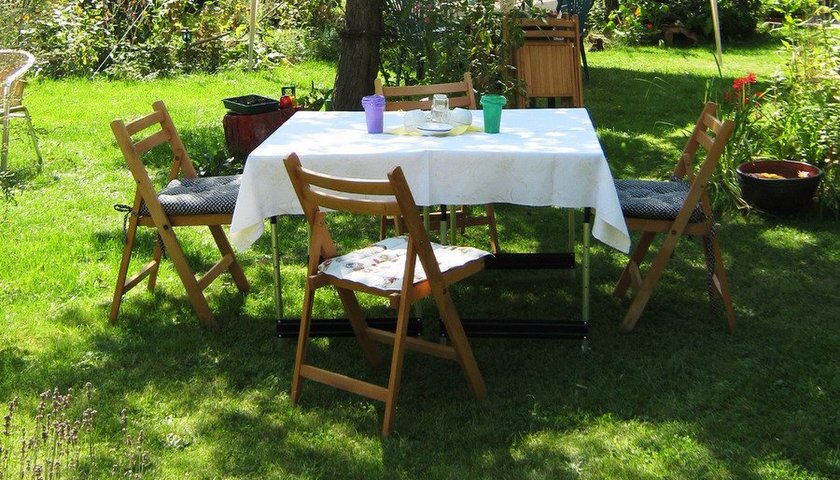 The club held a charity garden party in the lovely garden at the home of club president Ted Champion and his wife Pat on Sunday, July 23. The party was organised to raise funds for Stowmarket 1st and 3rd Phoenix Scout Group, Stowmarket Library and other local Rotary charities.

We were delighted to welcome our local MP Mrs Jo Churchill and her husband Peter to the event and were very pleased to have Brigadier Denzel Cowdrey and his wife Fay from Woodbridge, old friends and supporters of Rotary, with us.

More than 100 guests attended and enjoyed an excellent barbecue lunch with desserts mainly prepared by members of the Inner Wheel Club who also provided assistance with the serving. Two guests were celebrating birthdays and two lovely birthday cakes were presented, one to Mr Chris Rankin from Combs and the other one to Mrs Joan Cooper from Woolpit who had sacrificed birthday parties at home to support the occasion.

On display for all to inspect was a shelter box. These boxes are designed to provide all the necessary cover and emergency equipment for a family to survive in the aftermath of an emergency. The composition of the box depends upon where the emergency takes place. This is a world-wide charity and it stocks shelter boxes in several areas around the world for immediate deployment when necessary. The Stowmarket Rotary Club has contributed a sum of almost £22,000 over the past decade having recently sent a further £1,800. The photograph shows MP Jo Churchill with Rotarian Terry Auld, who explained the history of shelter box and where recent stocks have been issued, together with the club president Ted Champion who organised the event.

Putting competitions were also held during the afternoon organised by John Chappell. A raffle was held raising £565 and two paintings donated by the well-known artist Mr Tom Lund-Lack were auctioned for the charities raising a further £330.

A sum in excess of £3,000 was raised and cheques for £1,000 each were presented by the president to Vanessa Bonner for the Scouts and to Major Graham Harris OBE, MBE a member of the Friends of the Stowmarket Library committee.

Scouts were present during the afternoon and made a most valuable contribution to the event. The attached photograph shows the Scouts of 1st and 3rd (Phoenix) Scouts Group with the club president.

The Rotary Club would like to thank everyone who attended for their support in any way and for the generous donations made to make the event such a financial success.

Anyone who may be interested in Rotary either as a member or a friend who may be willing to assist or attend Rotary functions should contact the club secretary, with a note containing their address, via the Cedars Hotel, Needham Road, Stowmarket, IP14 2AJ.