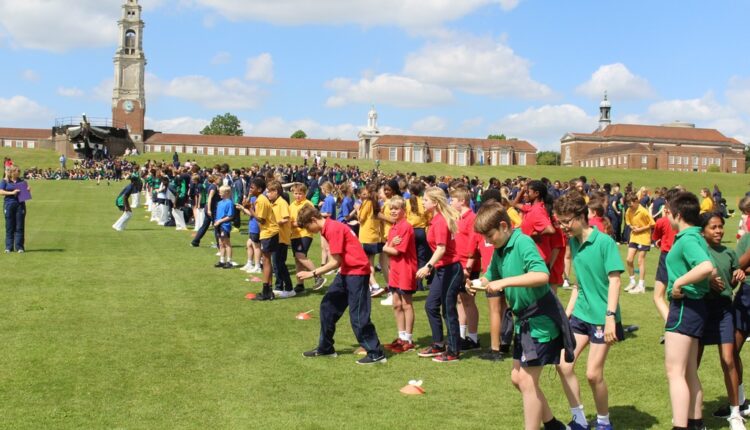 The Royal Hospital School (RHS) in Holbrook, Ipswich, is celebrating National School Sport Week 2022 this week after a string of excellent sporting news and performances by individual pupils.

This year’s theme for National School Sport Week is “Belonging – a place in sport for every child.” Nick Cooper, Director of Sport at RHS, comments “Our aim is to inspire young people with a life-long interest in sport and with so much on offer there is something for everyone. This positive approach generates an atmosphere of enthusiasm and healthy competition. Beyond the traditional school sports, we offer our pupils the opportunity to do sailing, martial arts, climbing, squash, golf, kayaking and so much more.”

18 year-old Frankie Hughes, RHS Girls 1st XI cricket captain and 18 year-old Charlie Allison, RHS Boys 1st XI cricket captain, both set new school records last week with Charlie scoring 174 runs and Frankie scoring 90 runs not out in their matches against Norwich School. Both Frankie and Charlie are currently involved in the Essex Cricket Player Pathway and Charlie was selected to play in the Essex Cricket 2nd XI squad recently against Middlesex and Hampshire, whilst Frankie was selected for the Essex Women’s Performance Programme.

In rugby, RHS pupil Archie Kean (18) has received a professional contract from Northampton Saints and will go on to play centre from July. Further to this three RHS pupils, Eli Govindasamy, Joel Sheldon and Michael Van Haren (18), have been selected to be part of the Lambs National XV Tour Squad to South Africa this summer. They have all been playing for the Lambs this year and are delighted to have been selected for the Tour Squad. Chris Terry, Founder and Chairman of the Lambs RFC, comments; “All three RHS pupils have impressed over the domestic season and their selection to represent the Lambs on tour is much deserved.”

In Netball, Grace Rothwell (18), RHS 1st Team Netball Captain has been selected to play in the London Pulse u19 Squad.

Whilst, in the sport of horse riding, three RHS pupils, Sophie Coward-Talbott (14), Mia Maguire (17) and Maisy Hunter (16) travelled to the Royal Windsor Horse Show to compete in their respected events and parade in front of HM The Queen herself, with the team finishing a respectable 7th place in their class.

In the spirit of the Platinum Jubilee celebrations, the whole school participated in a great fun ‘old school’ sports day including an egg and spoon race, a three-legged race, a skipping race, a fill the bucket race, a bean bag race and the RHS traditional welly wanging competition.