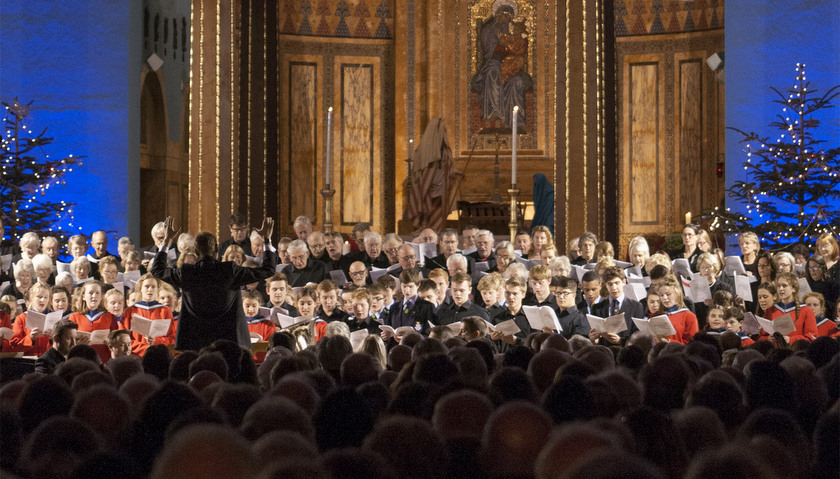 On Saturday 9th December, the Royal Hospital School will be kicking off the festive season with a celebration of the music of its Patron of Music, John Rutter.

The Cambridge-educated composer has produced some of the most popular Christmas music of the past 50 years, including Shepherd’s Pipe Carol, composed when he was just 18, and the magnificent Gloria (which will start the concert). He was described by David Willcocks as ‘the most gifted composer of his generation’ and on opening the Reade Music School at RHS in 2008, Rutter said;

“This is one of the finest music facilities I have ever seen. It will make a perfect home for the flourishing musical activities.”

Starting at 7pm in the candle-lit surroundings of the school’s cathedral proportioned chapel, the concert will feature the narration of celebrity guest, Frazer Hines, of Doctor Who, Coronation Street and Emmerdale fame.

Joining forces with Frazer will be the combined voices of the Holbrook Choral Society, RHS Chapel and Chamber Choirs and the Reade Brass Ensemble, which this year will include pupils playing alongside the professionals.

The evening will feature all the favourite sing-a-long carols and a delightful array of joyful works – this really is an event not to be missed.

Call 01206 573 948 for tickets. Admission is £12, concessions are £10 and students are free. There will be pre-concert drinks at 6.30pm, and refreshments will be available to purchase.
For more information, visit: www.experiencetickets.co.uk/rhsmusic
IpswichJohn RutterLive MusicRHSRoyal Hospital SchoolSuffolk
Share FacebookTwitterReddItWhatsAppPinterestEmail
Molly 673 posts 0 comments