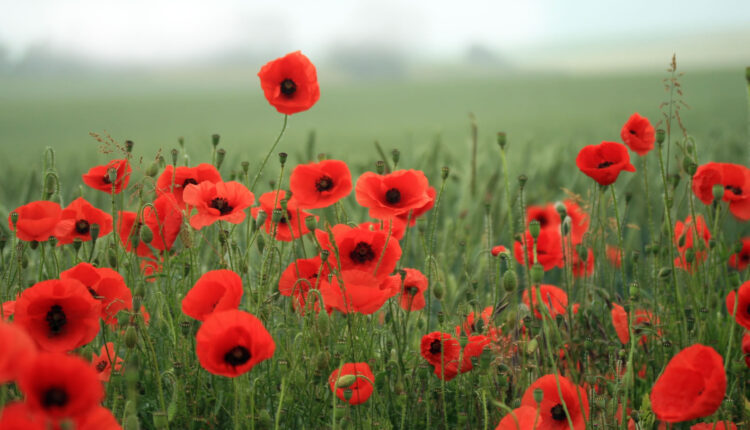 Last year’s observance of Remembrance Sunday and the associated Poppy Appeal was unique due to Covid-19 and the related restrictions on events and social gatherings. Government guidelines were changing as late as Wednesday 4 November.

Due to the requirements of social distancing, we could not hold our traditional procession and church service and had to dramatically condense the laying of wreaths ceremony at the War Memorial. However, thanks to Rev Diane and her team at St John’s Parish Church, Prayers for Remembrance were added to the usual Sunday Service which was streamed to a wider congregation and an open-air service was held on Remembrance Sunday.

Wreaths representing the town council, RBL, MP, Scouts, First Responders, the community council and Wattisham Flying Station were laid at the War Memorial in a staggered sequence and without ceremonial. The Guides were very creative in placing pebbles decorated with the names of those on the War Memorial around town.

We thank and congratulate the children of Bosmere School for their artwork and thought-provoking display at the Millennium Memorial. Both Bosmere and Creeting St Mary Schools held Remembrance services in school.

Continuing a ten-year tradition, Masie and Brendan from Bosmere laid a wreath at the Millennium Memorial on Remembrance Sunday, and ‘pods from Creeting St Mary School attended open-air services at church.

RBL had ruled that we could not hold house to house collections, although this limitation was subsequently eased so that we could place Poppy Boxes in shops, pubs and schools until the second lockdown struck on November 5, curtailing all local fundraising.

Similar arrangements were made in Creeting St Mary and Creeting St Peter, where some creative improvisations had to be made.

Our grateful thanks are due to everyone who bought a Poppy and to many who made additional generous donations. In Needham Market we collected £2,486, in Creeting St Mary £1,281 and Creeting St Peter £102 plus £464 in donations, making a total of £4,333. This is significantly less than the £7,000 that we raised in 2019 but we can be comforted that we have done our best in difficult circumstances.

What is important is that, despite the limits placed on our time and resources this year, the memories of those killed and injured in all conflicts within living memory and the hardships suffered by those they left behind were brought to mind and the lessons hopefully learned were passed on to the next generation so that they may do better in their turn.