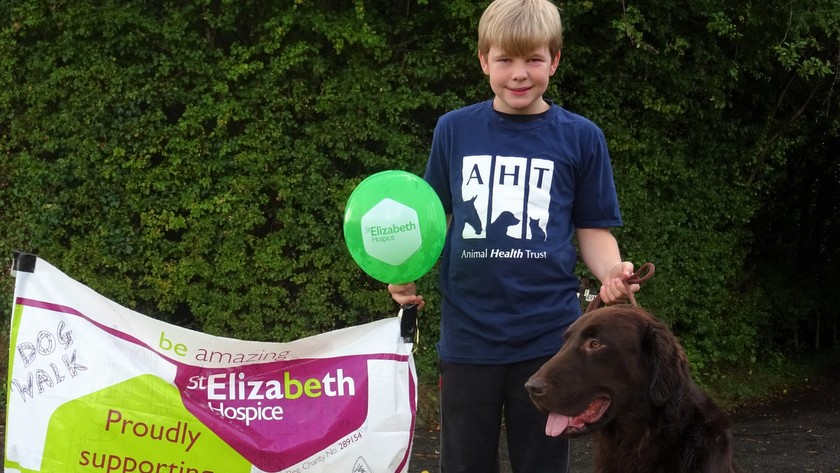 Pupil Raises More Than £1,000 For Charity

Robert Beevers, a 12-year-old Claydon High School pupil, organised a charity dog walk in aid of the Animal Health Trust and St Elizabeth Hospice in memory of his uncle, Edward Whittaker on Saturday 16th September and raised more than £1,000 with donations still coming in and collection buckets still to be emptied.

Robert worked hard asking for raffle donations and sent out an invitation for walkers with or without their dogs to join him and his flatcoated retriever, Brownie, on a walk sharing his love of the Suffolk countryside and dogs, stopping off at The Limeburners in Offton for tasty fish and chips, another of Robert’s favourites!

The weather was not so kind and kept some people away. The walkers appreciated their break at the pub for refreshments and the raffle before the big walk back up the hill and home. Some friends unable to make the long walk supported Robert by joining him at the pub.

“What an inspiration Robert is. He’s organised a fantastic event and raised a wonderful amount for us. The money he’s raised could provide a nurse for 24 hours in a patient’s home or at the hospice. That means a great deal to us, but more so to the local people that will be helped thanks to his fundraising.”

A quote from the Animal Health Trust:

“It is one of those truly heart-warming stories. Robert is an amazing young man – to undertake a charity dog walk in memory of his uncle is a really mature and sensitive thing for someone so young, it’s fantastic.”