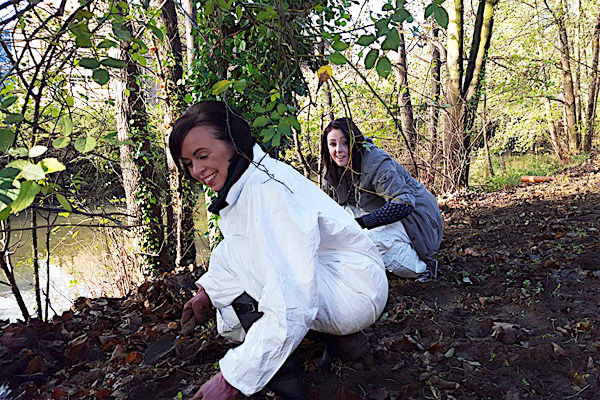 This year the Pickerel Project celebrates its 20th year. Formed in the millennium year, the group continues its efforts to keep the River Gipping footpath an attractive and litter free walk through Stowmarket.

The group, which meets on the first Sunday of each month, was joined by some new members this month that had seen social media releases put out by Mark Brewster, a volunteer from Onehouse. At 10am on Sunday 2 August, the group assembled at Wharfside House car park just off Prentice Road in Stowmarket. Keith Scarff, chairman of the group, welcomed all to the socially distanced event. The group, which restarted at the beginning of July, plans to carry out their remaining work programme for the year as normally as they can, subject to Covid-19 regulations and advice.

Keith said: “I was particularly pleased to welcome four new group members on our litter pick. It was also a significant day for the group as, although we have been collecting litter since the formation of our group, this was the final month of the year for our collection data analysis. We now have five years of data available. Staggeringly, this has proved to be the worst year yet. Despite lockdown, we have managed to collect nearly 900 kilos of rubbish this year consisting of general rubbish, cans and glass bottles. During the year we also collected four shopping trolleys, numerous traffic cones and signs, four tyres, a television, carpets and even a suitcase. It never seems to surprise the group which items we collect, as we only weigh the bagged items, so in reality we have collected far more than the 900 kilos.

“I would like to pay tribute to everyone who comes and volunteers their time with hedge trimming, path maintenance, our invertebrate surveys and of course the inevitable litter picking!”

During the lockdown, Adrian Sims and Robert Cracknell went down to gather over 160 kilos of rubbish while the group wasn’t operating.

Keith said: “Adrian and Robert are stalwarts of the group and see rubbish as their number one enemy! If you would like to join us, come along to any of our events. You will be assured of a warm welcome.”