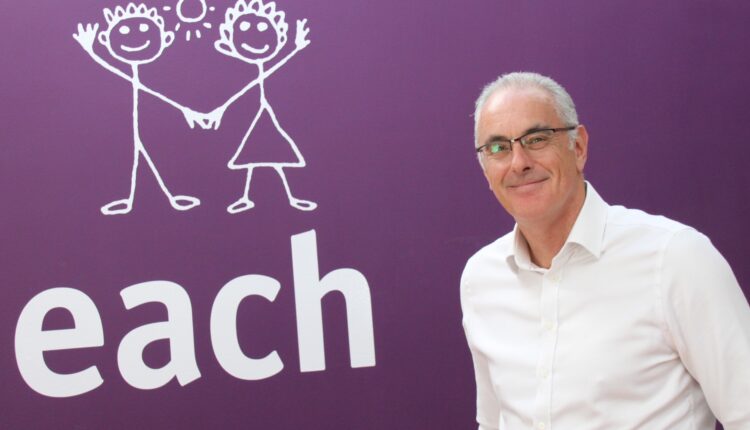 East Anglia’s Children’s Hospices (EACH) is delighted to announce Phil Gormley has joined as its new chief executive.

Phil started his tenure at EACH on Monday 3 August, joining from Her Majesty’s Inspectorate of Constabulary and Fire & Rescue Services (HMICFRS) where he was responsible for inspecting and reporting on the efficiency and effectiveness of police forces and fire services in the north of England. During the COVID-19 pandemic Phil has also provided advice and support to the Norfolk Resilience Forum.

He has worked at board level for the last 17 years and is best known to people in East Anglia for being Norfolk Constabulary’s Chief Constable between 2010 and 2013. During this time he helped develop one of the most advanced programmes of collaboration with Suffolk Constabulary.

Phil started his career at Thames Valley Police in 1985, moving to the Metropolitan Police Service in 2003, where he notably designed and implemented the blueprint for counter-terrorism policing, and West Midlands Police in 2007, where he was deputy chief constable.

Shortly before the end of his time at Norfolk Constabulary, Phil was awarded the Queen’s Police Medal. He then became the first deputy director general of the National Crime Agency and in 2014 led Operation Notarise, the largest ever UK law enforcement operation targeting online abuse of children, resulting in over 700 arrests. After this, he was appointed as Chief Constable of Police Scotland in 2015 before moving to HMICFRS in October 2018.

John Pickering, EACH Chair of Trustees, said: “Now more than ever, we need strong, strategic leadership to take the organisation forward. We undertook a rigorous selection process to ensure we appointed the right person and I’m delighted Phil has joined us.

“Phil offers huge character, high energy and strong leadership. He has extensive strategic experience and has operated at board level in a range of challenging and complex environments. He’s well-known and highly regarded throughout Norfolk, having left an excellent legacy in the county’s police force, and we believe has all the attributes to have a fantastic impact on our work.

“I would also like to take this opportunity to thank Tracy Rennie, who has done a superb job as Acting Chief Executive in exceptional circumstances, as we respond to the challenges that have arisen as a result of COVID-19. Tracy will return to her much-loved role as Deputy Chief Executive and Director of Care.”

Phil replaces Graham Butland, who retired on 31 October last year after 16-and-a-half years at the helm. His first task is to get to know the organisation, along with its staff, volunteers, supporters and key partners, whilst working hard to meet the significant challenges ahead, driving and developing EACH through the pandemic and beyond.

As part of getting to know the organisation, Phil spent Wednesday 19 August shadowing a care shift at The Nook, EACH’s hospice in Norfolk, having already visited its hospice in Milton, Cambridgeshire, and The Treehouse, in Suffolk. He said: “I’m delighted to have been appointed as CEO for EACH. It’s an organisation I’ve admired for many years and I feel privileged to be joining such a brilliant team of people, and to be given the opportunity to help make a contribution to their vital work.

“Being part of a care shift at The Nook was a very interesting and memorable day for me, and it really reemphasised how important our work is. The kindness and humanity I witnessed during my day there was so impressive and very moving.

“I’ve visited various other sites to meet colleagues and I’ve never had such a warm welcome. It’s clear to me that it’s the people, including our volunteers and supporters, who make EACH so special. There is a clear sense of a shared mission, with every role playing a vital part in the system to deliver outstanding care.”

What A Carve Up!

The Gift Of Time