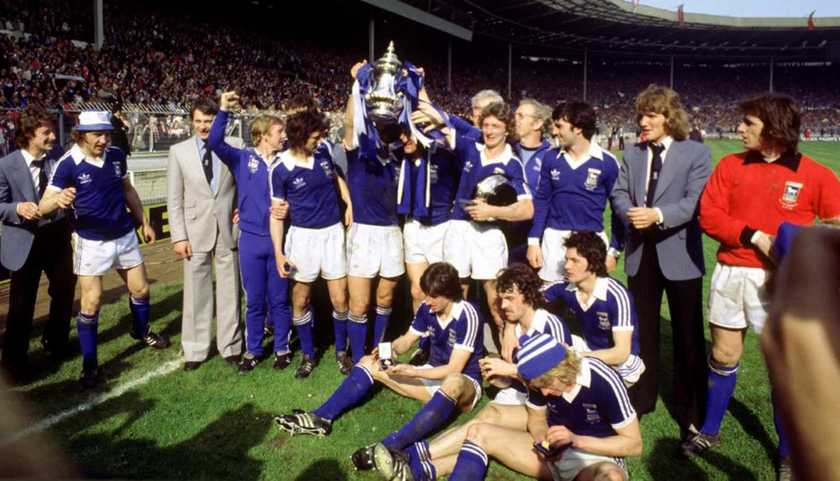 The New Wolsey Theatre has officially launched its fundraising campaign to stage a production to celebrate the legendary Ipswich Town FA Cup win of 1978, Our Blue Heaven, a musical production timed for the 40th anniversary of the victory in May 2018.

In order to meet the production costs involved in staging this sporting musical chronicling Town’s FA cup run, the theatre has launched its campaign to raise £45,000 in public sponsorship to cover a proportion of the costs needed to create the production.

At the fundraising launch event held at the theatre, theatre patrons and local business owners were invited to view the ITFC sponsorship packages available via crowdfunding site Indiegogo. The theatre has created 12 levels of pledge packages, each named after a player and manager Bobby Robson, from the winning Wembley squad.

Individuals can “feel good for a fiver” with a £5 donation for the Cooper package, or donate right up to the £10,000 for the ultimate package for any Ipswich Town fan, the Robson. Every package combines a unique level of gifts, some including premium tickets to the show, limited edition prints and specially selected, signed memorabilia from the 1978 team, donated by Ipswich Town Football Club.

Speaking at Tuesday’s event, Peter Rowe, artistic director of the New Wolsey Theatre and writer of Our Blue Heaven said:

“2018 will mark 40 years since Ipswich Town’s Historic FA Cup Victory, a moment when Ipswich united to celebrate success as the underdog became victorious. We are working to commemorate this anniversary by producing a brand new musical production, using the stories and memories of the people of Ipswich and Suffolk at the time.”

As part of the creation of the show, the theatre has collated stories from those who were caught up in the events of 1978, whether they attended the match or not, from the third round victory in Cardiff in January to the final in May, and the euphoria of the Victory Parade.

Stories that are funny, quirky, co-incidences and twists of fate, the scramble for tickets, the making of banners, trips to Bristol, Millwall, Highbury for the Semi; Peter Rowe has created the ultimate feel good show directly from these memories, combined with the hits from the era.

Ipswich Town Supporters Club co-ordinated the collection of the reminiscences, which will also be used as part of the ITFC Heritage Project and by the East Anglian Daily Times for a commemorative publication.

“Our Blue Heaven provides a chance for one of ITFC’s greatest achievements to be immortalised on stage.  It’s not just about what happened on the pitch on the day of the final though – fans have provided their stories of the whole cup run.”