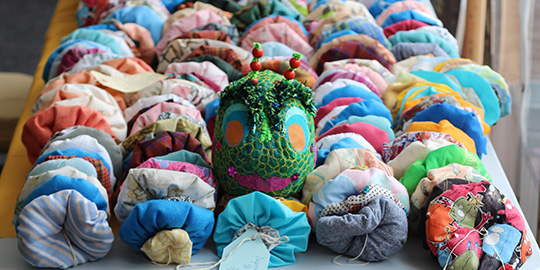 Throughout last year, more than 350 museum visitors and members of the local community cut out fabric, sewed, gathered and threaded puffs onto strings. A total of 5,864 puffs were finally strung together to make a caterpillar that measured 90 metres, 38 centimetres – that’s nearly four times the length of our 13th century barn!

Collections and Interpretation Manager Lisa Harris says: “A Suffolk puff (British) or yo-yo (American) is a circle of material gathered in on itself to form a smaller, double thickness, puffy circle. They were particularly popular with sewers in the 1920s and 30s when they could be joined together at the edges to make quilts. The technique has seen a revival in the last few years with many children in the 70s and 80s given toys made from puffs threaded onto elastic. We want to thank everyone that took part, whether at the museum, as part of a group or in your own home. You’re all officially amazing!”

This activity, supported by the Big Lottery Fund’s Celebrate programme, was part of the museum’s 50th anniversary celebrations, marking its original opening in 1967. Our Longest Suffolk Puff Caterpillar attempt enabled anyone and everyone to get involved with the museum as well as being part of our spectacularly Suffolk Guinness World Record attempt.

If you’d like to see the caterpillar it’s on display in the museum until October 28.

London to Paris in Memory of Eddie Rogers