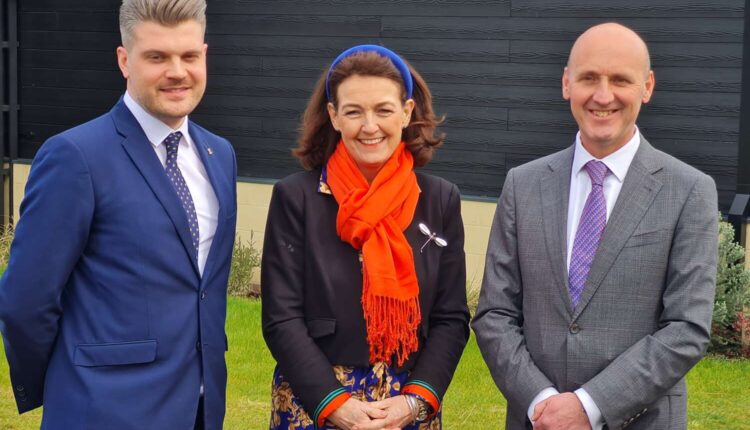 MP Jo Churchill was among the guests at the official opening of a Suffolk high school’s new Sixth Form block.

Students have been using the state-of-the-art facilities at John Milton Sixth Form at Stowupland High School, which is part of the John Milton Academy Trust, since the summer.

However, due to Covid-19 restrictions – and later storms Eunice and Dudley – the official opening had to be pushed back.

Mrs Churchill said she was impressed by the Sixth Form and was delighted to officially open the building.

She said: “I think this is a fantastic opportunity for our students in Mid Suffolk to access first class education and allow them to achieve the potential we know they all have.

“It’s a new building, a new beginning, and I look forward to great things being delivered by the John Milton Academy Trust and its teachers for the young people of Suffolk.”

Mr Hailstone said: “This new Sixth Form block gives our students the opportunity to learn in a purpose-built, state-of-the-art building with incredible facilities.

“Not only does the new building have all the latest technology, its large, open common room gives the Sixth Form a real sense of community.

“It is brilliant to finally celebrate its official opening after having to delay due to the coronavirus and storms Eunice and Dudley – it has been a long wait.

“We are very proud of the new Sixth Form building and would love to show you around.”

Discussions for the Sixth Form block at Stowupland High School, began in 2017 – with designs for the block going out for consultation in mid-2019.

Suffolk County Council’s Development and Regulation Committee gave the green light to the plans in October 2019 and building work began in December 2019.

As well as the new Sixth Form building, the plans included significant upgrades to the school’s parking facilities and bus park.

Work on the project was completed in early 2021 and students began using the block in the spring of last year.

Karen Grimes, CEO of the John Milton Academy Trust, added: “This new Sixth Form block demonstrates the Trust’s civic responsibility and its commitment to the local area, its young people and their futures.

“I am delighted the School has finally been able to celebrate the opening of the new Sixth Form building officially, and we look forward to welcoming many more students to our Sixth Form in September.”

The school is hosting Tea and Tour events on Friday mornings, from 10am to 11.30am, giving people the chance to look around the new building.

For more information on John Milton Sixth Form at Stowupland High School and to book a Tea and Tour event place, see www.stowuplandhighschool.co.uk

THE RETURN OF CHARACTER CREATIONS!  THE POPULAR COMPETITION ESPECIALLY FOR PRIMARY SCHOOL AGE CHILDREN ACROSS OUR COUNTY!

Exciting Opportunities Ahead at The Museum of East Anglian Life!