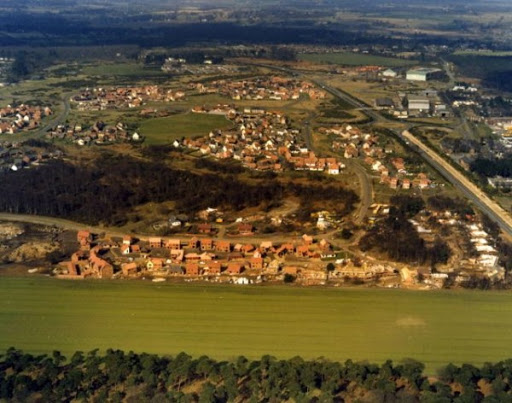 Damage to fence
The fence between the SSSI and the fields to the south of the SSSI, particularly next to the remaining runway, have recently sustained quite a lot of damage. We would ask that these fences are left alone and remind you that you should only walk on the designated public rights of way on the fields to the South of Martlesham Heath. The SSSI has seen a tenfold increase in walkers over 2020. It is an important part of Suffolk heaths and we would ask that this area is respected and that you stick to the existing paths.

The Mega Bash
Covid-19 and lockdown willing, the Mega Bash will shortly take place. Before then, there is a large-tracked flail operation to cut back gorse. Banksmen will be there to protect the public and we would ask that you listen to them and do not go near the flail. It will be only for a week or so and there will be plenty of areas still available for you to walk on.

2021 AGM
Due to Covid-19, consideration is being given to postponing the AGM from March to later in the year. A final decision has not been made but it looks likely that the AGM may be held on Tuesday 8 June. This will be confirmed later.

Annual Maintenance Surcharge
A small number of members who had not paid their 2020/2021 Annual Maintenance Charge by 1 December 2020 were charged a £10 surcharge. Chasing outstanding fees is time consuming and the surcharge (as agreed at the March 2020 AGM) is there as an incentive for members to pay their fee on time.

Gorse Management
We carried out some gorse management in January. Also, the entrance onto the heath from Pine Bank was widened to allow fire brigade access in the event of any fires starting during the drier months of the year. Any established trees will be left to try and suppress the growth of the gorse. We have planted some wildflowers on a section between Whinfield and The Grove. The taped area will be taken down in mid-February when the seeds would have established themselves. We also have a host of other tree maintenance work taking place throughout the village.

In 1942 the Bradford Property Trust bought the Brightwell Estate, of which the aerodrome at Martlesham Heath was but a small part. In 1960 this was released by the Ministry of Defence and the first planning application for a village on the site was submitted in 1963. The place seemed to be an inspired choice. Land unfit for agricultural use, but well suited for building; excellent communications and a site equidistant from the growing port of Felixstowe and the county town of Ipswich; a scheme which fell neatly into the regional planning strategies of the time and which was wholeheartedly supported by the county planning officer. In fact, by 1965 the idea of a village had given way to a town.

Clifford Culpin and Partners produced a master plan for a town of 10,000 but ‘the plan has been so drawn as to be capable of being the first part of a much larger scheme’. By coincidence, this was the year that Richard Crossman gave the go-ahead for New Ash Green, ‘a new model village’. In view of the unhappy vicissitudes of that project in succeeding property booms and slumps, it may have been a blessing in disguise that planning tangles, hinging mainly upon the provision of roads and drainage, delayed the successful planning application for Martlesham Heath, once again a village, until 1973, almost 10 years to the month after the first one.

Land values and the cost of infrastructure, together with a perennially uncertain and mercurial housing market, are the major deterrents to the development of new settlements on a relatively small scale. It was a shrewd purchaser who sniffed out the Brightwell Estate in the middle of World War II; it was a shrewd seller who released plots to the Post Office for the construction of its Research Establishment, and to the Suffolk County Constabulary for its new Headquarters; it was a shrewd developer who leased the units on the industrial estate, first in the hangars and outbuildings of the aerodrome and then in a series of new warehouses and factories. The development of Martlesham Heath could, therefore, support a few uncertainties and marketing hiccups as well as the considerable financial commitment to a new link road, the spine road of the village itself and extension of drainage facilities, only feasible because of low original outlay.

The unusual mixture of factors where Martlesham Heath is concerned – the poor-quality land, the low price at the time of sale, the location, the neat equation with regional planning policies over a lengthy period – have allowed Parker’s scheme to come to fruition. It would be highly unrealistic to expect to find a similar selection of fortuitous circumstances elsewhere. It would be flying in the face of evidence – the struggles at New Ash Green and Bar Hill, even the delays and problems encountered by Parker himself – to imagine the possibility of a rash of new villages, whether developed by local authority or private initiative.

There is little doubt that the way forward lies in an incremental policy, whether this be envisaged as village infilling or additional hamlets according to the existing settlement patterns.