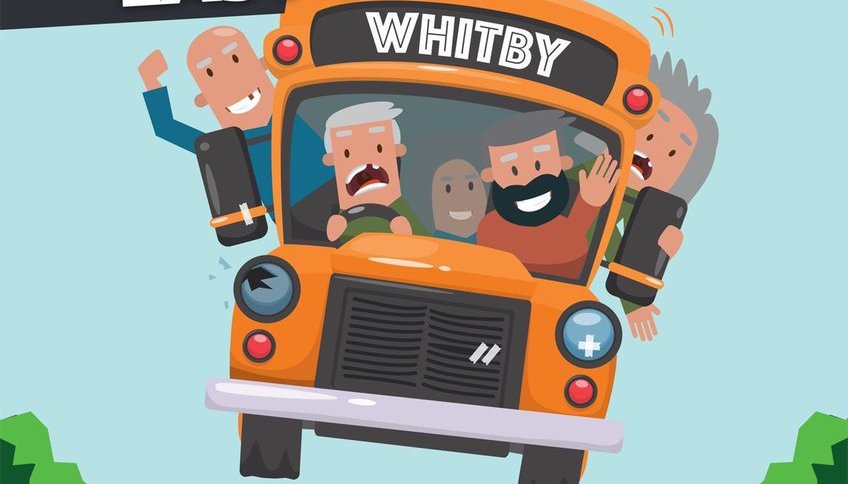 Make A Date For Last Tango in Whitby

Stowmarket Operatic and Dramatic Society are bringing a little slice of Mike Harding to town with the hilarious comedy Last Tango in Whitby in May 2019. The play tells the story of an unexpected spark of mutual attraction between Pat and Phil while Pat enjoys a charabanc trip to Whitby.

Director Tory Bolger likes that the play mixes comedy with one of her great passions, dancing. “It’s a play about a group of people going on holiday together. I liked the idea of a group of more mature people, getting together and going wild!”

The play, while tinged with sadness with Pat having recently become widowed, is a feelgood comedy that is proving great fun for the cast and all involved at rehearsals. “There are a lot of dances, with at least 15 in Act One, and with several weeks to go, they’re also really getting on top of the lines, and some of the cast do have quite a few lines to learn!”

Although Tory has choreographed several times before, she has a dedicated choreographer to allow her to concentrate on the directing, but admits that old habits die hard, and she did get to choreograph one of the dance scenes.

Pat, who was very much in love with her late husband, is doing their annual trip to Whitby without him for the first time, and it’s there that she meets Phil, a member of the hotel entertainment team. Realising life is short and that you have to live and enjoy every part of it, she finds a connection with Phil, under the sometimes-disapproving eyes of her friends.

Tory is pleased the play showcases some of SODS’s more mature members alongside some younger members. “SODS haven’t put on a comedy for some time. People can relate to it, relate to the characters in the play. They can come and watch it and say, ‘I do that,’ or, ‘I know somebody like that,’ and that’s what makes comedy funnier. It creates that feel-good factor.”

And so how does it all turn out? “You will have to come and see and find out. It will be a fantastic evening, a real giggle. I think we have captured that feeling you have when you’re down the pub with your friends, or at a social club. I want the audience to feel like they’re eavesdropping and watching something private that’s going on with these people.”

“With less than two months to go, the set is built, scenery painting is underway and before long, scripts will be set aside and the polishing begins, which is the part they’re all really looking forward to. The lovely thing about putting on a show for our audiences is knowing that we will make them giggle, give them a great time and send them home happy.”

You can see Last Tango in Whitby between May 15 and 19 at The John Peel Centre in Stowmarket. Tickets are on sale now at www.johnpeelcentre.com. For more info about SODS, visit: www.stowmarketoperatic.org.uk.