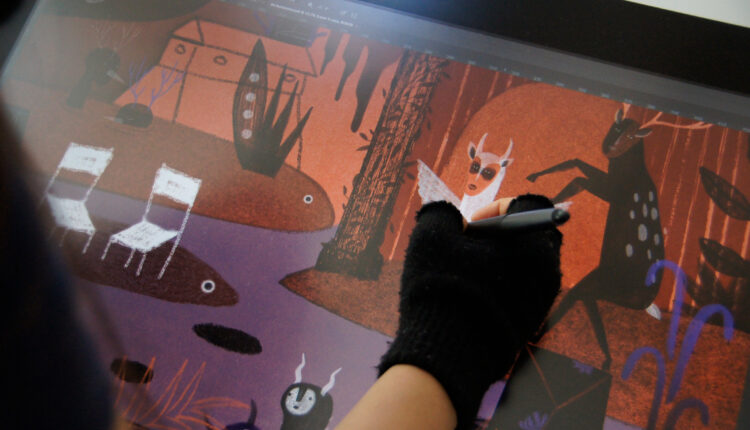 The Eastern Angles Centre in Ipswich is set to see some vibrant new artwork in its windows this month. A key focus for the new arts and heritage centre is to provide space and activities for the local residents. With funding from the National Lottery Heritage Fund, Eastern Angles has commissioned Ipswich based, Colombian born, visual artist and illustrator Catalina Carvajal to lead the project, Local Legends.

She’s been working with the community to hear about the hidden, unsung heroes, and helpers who keep the community thriving. Nominations from over 70 young people have included Kia – an Assistance Dog, John – who collects litter along the river, and Kasha Blake Headteacher at Handford Hall Primary School. Additional nominations for community members included, the postal workers and local shopkeepers as well as Lucy Hood, Senco teacher at St Matthews CE Primary School. A special place is held in the hearts of the community for the nurses and doctors, teachers, family and friends that have helped us through the past year. Heroes can be found in all forms, we even have imaginary ones. Catboy, was nominated as the supportive brother of one of our workshop attendees.

Catalina explains ‘I’m glad I had the chance to connect more with my local community and to be able to make a contribution through my profession. Only by interacting with other people can you get a better view of the world around you. Overall, it’s been a very moving and revelatory experience for me. Although I heard some sad and tough stories, there was always something positive and touching that could be taken from them. Some of the most basic things that many of us take for granted are not available for all.’

Eastern Angles thrives on storytelling and is excited to show the hidden stories from within the West Ipswich community.

The Local Legends window display will feature murals by Catalina which have been inspired by artwork received from the community. These will be up and available to view, alongside the artwork nominations from the community, from 12 December at The Eastern Angles Centre (formerly the Suffolk Record Office) in West Ipswich along Bramford Road and Gatacre Road.