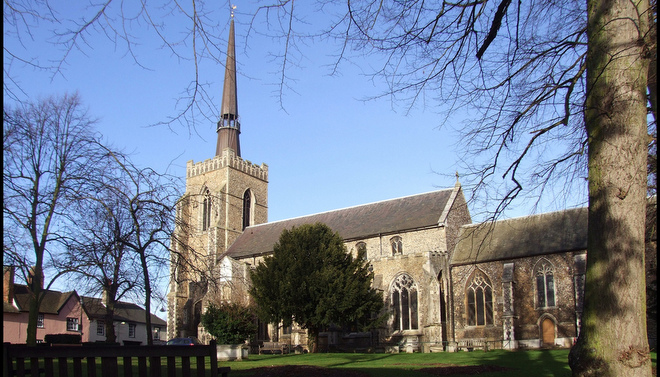 Two years after Stowmarket Parish took the decision to live simply, the parish has been given its LiveSimply award – becoming only the second in the Diocese of East Anglia to receive one. Allan Scott reports.

The award was given to Stowmarket’s parish priest, Fr David Finegan, and members of the CAFOD+ group on the day of their annual Duck Race’ which raised more than £400 for CAFOD, as well as giving old and young alike a fun day out in the open air.

When the process began, Stowmarket was already a Fairtrade parish. It was the largest single contributor among Stowmarket churches to the ever-increasing requirements of the town’s foodbank. It was also actively supporting communities in Palestine, Africa, Cambodia and India. This was about doing even more, for instance by avoiding waste, saving energy and reducing the parish’s impact on the environment.

The CAFOD+ group, with Fr David’s active support and assistance, looked at more ways in which the parish could adopt and promote the principles of living simply. Leaflets explained what the programme was about, while the weekly newsletter suggested actions people could easily take to help. A few months later, parishioners were given a simple questionnaire at the end of a Sunday mass, listing the suggestions and asking which they had taken up. The results were excellent, with a very large number of completed sheets and an 85% positive response to the questions.

The group also produced their very own LiveSimply cotton shopping bag (before the plastic bag levy came in) to help parishioners reduce their use of non-recyclable plastic bags.

They went on to organise and deliver a series of talks and presentations on Laudato Si which encouraged discussion and raised awareness about environmental issues and what individuals and groups can do about them. Parish actions included organised recycling for batteries, stamps, paper and printer cartridges and the donation of unwanted tools, bicycles and computers to charities that could make use of them.

The parish is now planning new actions it can take to continue this work in the years to come – including an environmentally responsible extension to the parish centre.

If your parish would like to enter for the award, you can find useful resources at: ourladystowmarket.org.uk/live-simply

Stowmarket Town Council Award Over £10,000 in Grants & Update from the Mayor