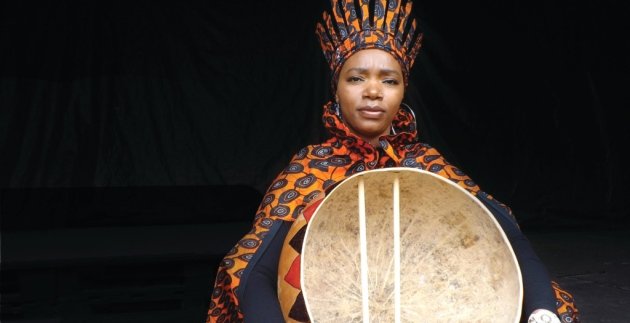 “An overwhelming and magnificent introduction to the beautiful music and dance of Zimbabwe, as well as cultural artefacts and historic tales. [Anna Mudeka is]…magnetic and warm as well as a skillful and exciting musician.” – Carla Phillips, Eastern Daily Press.

Kure Kure/ Faraway chronicles the Great Migration of Anna’s ancestors, the Bantu tribe, across central Africa and frames it in her personal struggle of balancing a quest for global adventure while remaining true to the traditions of her dynastic forebears. It’s a story of identity, assimilation, and the challenges faced by migrants, as relevant in ancient times as they are today.

Told through the music, dance and mesmerising ululation of the Shona people, accomplished mbira player Anna sets the scene for an epic odyssey traversing legends of the African diaspora, evoking ancestral and modern identities. From the fabled great march of the Bantu Tribe across the Tanganika and Baka regions to Zimbabwe some 5000 years ago, Kure Kure/Faraway, explores seismic shifts in the regions’ cultural history.

Homage is paid to the spiritual deity and female warrior Nehanda who united the Ndebele and Shona tribes to rise up in the first Chimurenga war against western colonialists in the late 1890’s and whose execution has defined Zimbabwean nationalism ever since. Anna conjures the sensory influence of her grandmother in a deeply personal soundscape, contrasting this with the emotional jolt of moving to a new country and finding herself alone, vulnerable, excited and empowered.

“I am a proud Bantu, Munhu, Ubuntu – human being. My identity, my history, my ancestral beliefs, my DNA has made me who I am. I am everything and everyone who has lived before me!”

Kure Kure/Faraway is a multi-dimensional show that employs Anna’s traditional skills as a highly talented mbira (thumb piano) player, drummer, singer and dancer set alongside multi-media imagery and video. Many of the shows are accompanied by interactive and immersive workshops, perfect for all ages and abilities to learn clapping rhythms, shakers & drumming, dance moves and so experience a true taste of Zimbabwean culture. An invitation to remember ancestors, their wisdom and their stories, these workshops offer an insight into the uplifting and soulful spiritualism of a Mbira Shona celebration.

Kure Kure/Faraway is an original theatre work devised by Anna Mudeka and a team of associate artists. Directed by David Farmer, produced by Arts La’Olam and co-commissioned by Norwich Arts Centre, this tour has been funded by Arts Council England.

Where On Earth Are You?