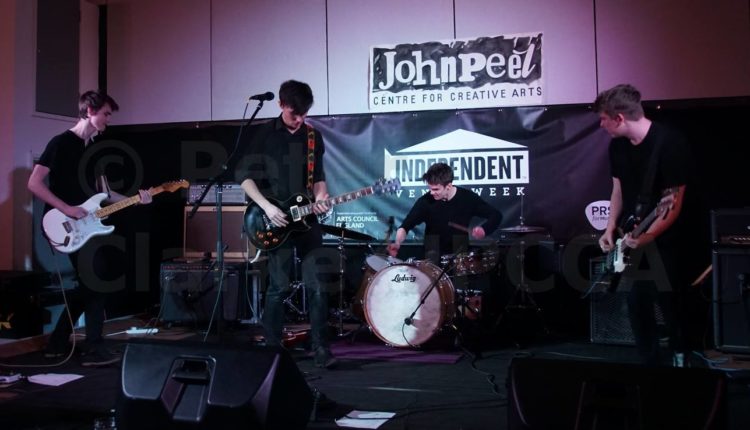 IVW 2020 will run from Monday 27th January until Sunday 20th February and again it’s another jam-packed week of live music at the Stowmarket venue.

IVW is a national programme which has provided a fantastic opportunity to shine a light on the country’s fantastic grass-root music venues, including the JPC, and the work they do.

In 2018 BBC Radio 6 Music’s Steve Lemacq attended and broadcast parts of, the JPC emerge gig as part of his IVW tour, in 2019 Patron Sheila Ravenscroft spoke on BBC Radio 4’s Loose Ends about the John Peel Centre and its work.

In 2020, IVW will be presenting Long & Winding Road, a feature documentary about independent live venues,at numerous venues across the country and it will feature the John Peel Centre.

The JPC IVW programme will be as follows:

As with previous years we will be kicking off the week with Re:emerge. The John Peel Centre is inviting back some of the memorable local artists that have performed at the now established JPC emerge nights, during 2019. IVW 2020 Re:emerge will feature FLEAS, Salvador, Palamino Kings & Sandcastle Jesus. At just £3 on the door there is no better way for fans of live music to show their support, not only to their local venue but also to the rising stars within the region.

Although primarily a solo singer songwriter it is in recording and live performance collaborations that Rev has made his name. (In 1986, he formed the Red Sky Coven Travelling Folk Club with the poet/Novelist Joolz Denby, New Model Army lead singer Justin Sullivan and bassist Brett Selby. They have recorded 5 live albums.)

Rev’s songs have been recorded by a varied list of performers over the years: Eddi Reader, Rory McCleod, Maddy Prior, Rose Kemp, The Oyster Band, Justin Sullivan , the Levellers, Kathryn Roberts and Sean Lakeman. In 2008 Rev received a gold record for 100,000 sales of the song Maid of the River recorded by the Levellers for their album Zeitgeist.

Rev will be performing with Sanchia Hylton-Smith and tickets are £10 adv/£12 on the door.

The JPC is really excited to welcome ARGH KiD to Stowmarket. ARGH KiD is an English alternative hip-hop band from Manchester, led by the MC/Poet David Scott. With an eclectic approach to hip hop featuring a live musician to provide a backdrop to life in austerity UK, with all its flaws and lingering beauty.

His first two singles ‘Frank’ and ‘Neighbours‘ were met with critical acclaim and support from industry big hitters such as Chris Evans, Janice Long, John Kennedy to name but a few. Their live shows are a high-octane concoction of breakbeats, outstanding musicianship and a powerful and passionate lyrical outpouring rarely seen on stage these days….best of all tickets are only £6 in advance or £8 on the door.

It will be a return visit to the JPC for the hugely popular Suffolk based band, Thy Last Drop.

It is impossible to stay still listening to Victorian murderpunk/vagabond folk quartet. It is set to be a great night full of entertainment… expect macabre tales set to foot-stomping folk with a touch of cabaret! Tickets are £7 advance and £10 on the door.

Funke and the Two Tone Baby is a one man sonic explosion! Uncategorized and uncharted. Jammed halfway between frenzied alt-blues and metronomic dance beats. Combining guitar and harmonica with beatboxing and effects that seamlessly collide the organic with the mechanical to create a fresh sound of unstoppable rhythm and unrelenting melody… We cannot wait to hear what the night will bring £7 in advance and £9 on the door.

The Karpets are an Inspiral Carpets tribute band… but a tribute band with a difference: their lead singer Tom Hingley was actually the lead singer with Inspiral Carpets from 1989-2011. Tom sang on all the Inspirals chart hits, including This is How it Feels, Saturn Five, Dragging Me Down, I Want You, She Comes in the Fall and all the songs on the bands four Major label albums – Life (1990) The Beast Inside (1991) Revenge of the Goldfish (1992) and Devilhopping (1994). Tickets £15 advance and £18 on the door.

Join us for our regular comedy night at the John Peel Centre to celebrate the culmination of a great week of events that is Independent Venue Week 2020! The evening will feature Rob Deering, Huge Davies, and Matt Hutson, plus compère Chris Betts. Rob Deering is one of the most in-demand headliners on the circuit. He is best known for his highly successful national tours, winning appearance on Celebrity Mastermind. His unique brand of guitar loop pop-and-rock soundscapes mixed with comedy flair are guaranteed to bring the house down. Huge Davies, recently featured on Harry Hill’s Clubnite, fresh from his January run at the Soho Theatre in London of his Edinburgh Comedy Award 2019 nominated show The Carpark and Matt is a thunderbolt of perfect songwriting energy and not to be missed. Drawing this all together is one of the warmest and most entertaining comics on the UK and Canadian scene, Chris Betts. Mixing up philosophy, satire with the best of bar etiquette, his brand of whip-sharp silliness is sure to get the whole night on an unstoppably hilarious course. That’s four great comedians for just £10 in advance or £12 on the door.

Tickets for all JPC IVW gigs can be purchased via the JPC website www.johnpeelcentre.com or between 10am & 2pm, Monday – Friday at the JPC Box Office on 01449 774 678.