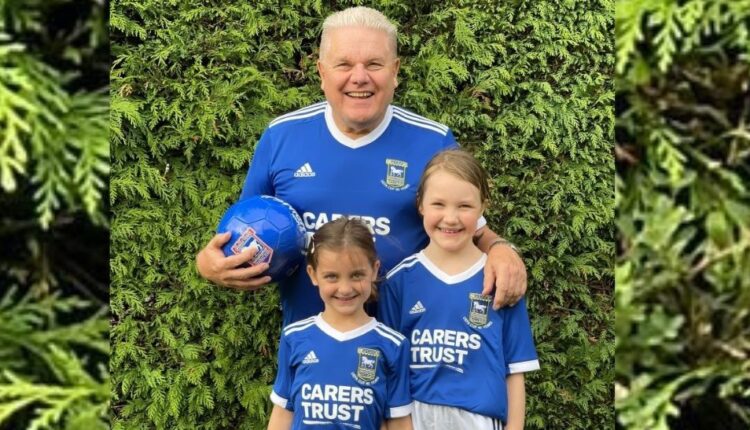 An Ipswich Town Football Club fan has written and recorded a song to celebrate his 60th season watching the Blues, which will also be raising funds for independent Suffolk charity St Elizabeth Hospice.

Town fan George Baker penned the song, ‘Proud to Wear the Blue’, to celebrate the 60th anniversary of Ipswich becoming champions of England in 1961/62.

Combining his love for music and football, the song and accompanying video reflect on his own experiences of supporting the Tractor Boys, who he has supported since he was a young boy.

George, and his wife Libby, have been supporters of St Elizabeth Hospice for many years and their family business, George Baker Shipping, is also a charity partner for the hospice. They have seen first-hand the value of the hospice’s services, with friends and relatives receiving support from the charity over the years.

As part of Proud to Wear the Blue, for every time the video is viewed in full on YouTube, 10 pence will be donated to the hospice, with over £1,625 having already been raised since the song was published in October 2021.

George said: “I have been overwhelmed by the support and positive feedback from Ipswich Town fans in response to the song.

“I am keen for this to be an ongoing charity project to support the hospice, so I encourage anyone who enjoys the song to view it multiple times, like and share on social media in order to help keep generating more money for St Elizabeth Hospice, who do such brilliant work in the local community.

Fiona Ginn, Development Fundraiser at St Elizabeth Hospice, said: “Thank you so much to George for supporting the hospice with his brilliant song for Ipswich Town.

“As a keen fan of Ipswich Town, I know Proud to Wear the Blue is sure to become a fan favourite, while also raising vital funds for the hospice and our work in supporting patients and their families in the Suffolk community.”

To watch Proud to Wear the Blue and support George’s fundraising visit: www.youtube.com/watch?v=yg_3Z106JvQ.

To find out more about St Elizabeth Hospice call 01473 723600 or visit www.stelizabethhospice.org.uk.

Is your SME business looking to diversify in the current climate?

Trial the latest technology at your local hearing care specialists!