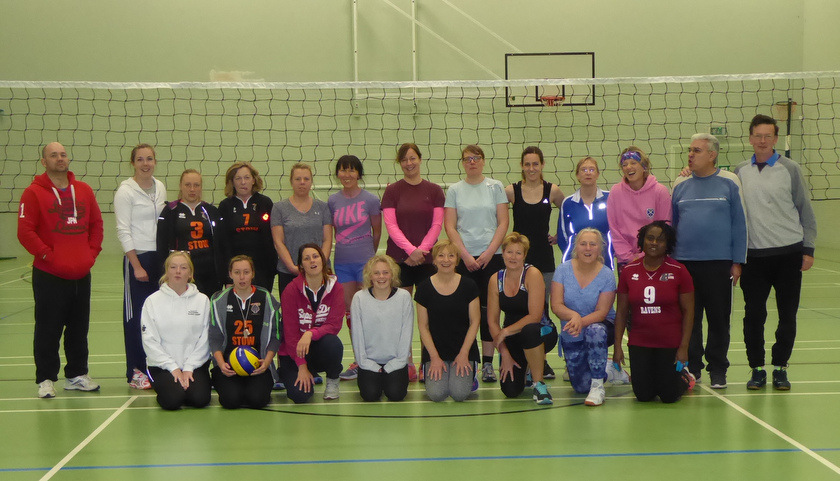 This last month saw another big entry in the popular 6-a-side indoor series held at Northgate School, with six teams in Div 1 including Ravens men, and eight teams in Div 2 including their ladies. The men’s team included four of their improving juniors and remarkably managed to win their initial pool with exciting victories against local rivals Ipswich and Stowmarket.

This meant they qualified for the final group, where they followed up with an excellent performance in losing narrowly to Lakenheath, who have not yet lost a match this season, but finally the wheels came off somewhat as they lost to Stowmarket who they had previously beaten in the pool phase.

“We played our highest level of volleyball to date. It was a reward for our hard work in training. We just lost concentration in the final game and gave Stowmarket their revenge”

Meanwhile in Div 2, their ladies team entered a team of eight players in total including two new members and two of their U15 girls. This gave the newcomers in particular some great experience, but it also meant they had to adopt a system of substitutions which rather confounded them and they lost all four games – albeit all four of the opponents were teams of mixed men and women.

But the highlight of the month, was the first match in the new Suffolk Ladies 6-a-side league. This new tournament is intended to develop the ladies’ game through competitive matches between players on a level footing and there will be a series of triangular matches throughout the season.

In the first one, Ravens met with an experienced and talented team from Stowmarket, and an after-work group SCC Seagulls.  For many of the players this was their first experience of a match in this format, the games were played in a friendly spirit and Ravens were pleased with their return of a win against Seagulls and defeat against Stow Aces.

At Ravens, they are actively seeking new members and will welcome anyone, male or female, experienced or complete beginner, and any age from 13 upwards. Qualified coaches run the sessions with a mixture of training drills and friendly games, making them very enjoyable while helping participants to improve their skills and fitness. We meet every Saturday from 2-4pm and most Tuesdays from 7-9pm at St Alban’s School in Rushmere.