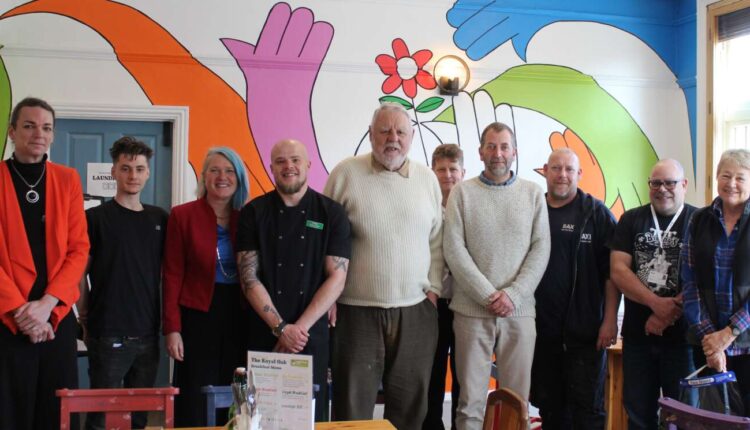 A community café in Ipswich has renamed its Big Breakfast in honour of a man who has been instrumental in the success of the charity behind it.

Emmaus Suffolk, a charity that supports people who are experiencing social isolation, loneliness and long-term unemployment as well as those at risk of homelessness, opened the doors to The Royal Oak in December 2021, and the café has proved a hit with locals thanks to its delicious freshly cooked food.

The charity wanted to acknowledge the work of Terry Waite CBE, President of Emmaus in the UK, who has supported Emmaus Suffolk since it first opened in 2006. As Terry is a man who loves his food, the charity has decided to rename its big breakfast in his honour.

Terry Waite became president of Emmaus UK shortly after he was released from captivity in Lebanon in 1991. He had visited the country to try and secure the release of hostages but was himself captured. He was held for 1763 days, the first four years of which were spent in solitary confinement.

Since his release, he has worked tirelessly to support the Emmaus movement in the UK and the work it does with people who have experienced homelessness and those at risk of homelessness.

Along with Terry, the breakfast naming event was attended by some of the Ipswich trades that were involved in transforming the former pub into a community café and retail space. This includes Ayton Property Maintenance, Suffolk Fire Safety, Russell Douglas Plumbing, Andy Isgrove Electrics, Beanland Associates Architects and RJ Dean Plasterers.

The Royal Oak Community Café provides a safe and welcoming space for individuals and families to enjoy freshly cooked food on a budget. Not only is the café a vital source of income for the charity, The Royal Oak also provides meaningful volunteering opportunities for people experiencing social isolation and long-term unemployment. By offering volunteering roles within its social enterprises, Emmaus Suffolk gives people the chance to make a difference for themselves, in a supportive environment through work-related experience and training.

Along with the community café, The Royal Oak is also home to the Emmaus Suffolk Pre-Loved Emporium, selling high-quality furniture, clothing, shoes and homewares.

“Our community café has been incredibly popular since we opened the at the end of last year and we are incredibly grateful to the tradespeople from across Ipswich who supported us to get to where we are now.

“Our breakfasts, in particular, have been very popular, and as we know Terry Waite loves his food, we thought renaming them in his honour would be a great way of recognising the work he has done to support Emmaus Suffolk and also the Emmaus movement across the UK.”

“I loved visiting Ipswich to see the work Emmaus Suffolk is doing and to visit The Royal Oak. I am so impressed with how they have transformed the former pub into such a fantastic community space.

“I couldn’t visit without sampling the food, and I am delighted that they have decided to rename the breakfast in my honour. If you haven’t tried the food yet, I would really recommend a visit!”

The Royal Oak Community Café and Pre-Loved Emporium is open Tuesday – Saturday, 10am – 4pm, and can be found on Felixstowe Road, Ipswich.

The Food Museum Is Coming To You