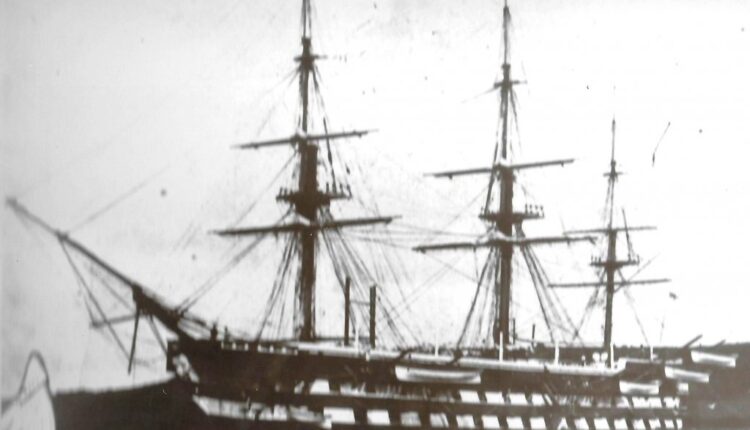 Did you Know?
There was more than one ship called HMS Ganges. The first HMS Ganges was a 74-gun ship, originally named Bengal, built by the East India Company, informally known as John Company, on the Thames and presented to the British Government in 1779. HMS Ganges took part in several actions at sea during her lifetime, including her involvement against the Danes as part of Admiral Lord Nelson’s fleet. She was finally broken up in 1816 after 34 years of service. There were a further two ships named Ganges, both armed East India Company ships, until the fourth ship to be named HMS Ganges was built in Bombay. A 2,283 ton 84-gun ship, she was launched in 1821 and carried a crew of 700 men.

In 1857, flying the flag of Admiral Sir Robert Baynes as Flag Officer Pacific, she became the last wooden wall line of sail Battleship to fly an Admiral’s Flag at sea. Part of her duties whilst in the Pacific was to survey Salt Spring Island where the principal town is still called Ganges. A study of maps of the island will also show a number of areas and roads named after the ship and members of her crew.

She was finally moved to Sheerness in 1861 and lay idle there until 1865. On 5 May 1865, she arrived under tow at Devonport to be stripped of her guns and fitted out as a training ship. On 1 January 1866, the whole of the boys on board HMS Wellesley were transferred to HMS Ganges at Plymouth and she arrived at Falmouth on 20 May 1866. For the next 33 years she was moored at various locations at Mylor in Cornwall. On 29 August 1899, she slipped her moorings and, escorted by the tug Escort, made for Devonport. She had her keel scraped and the boys were transferred to either HMS Lion or HMS Impregnable. Fourteen days later she moved, partly under sail and in the company of HMS Arrogant, to Sheerness. On November 11, with 500 boys on board, she was moved to Harwich in convoy with HMS Hearty, thus began the training of boys for the Royal Navy on HMS Ganges on the East Coast.

With the arrival of HMS Ganges off the Suffolk coast, work started on constructing the Shore Establishment with the first buildings being temporary sick quarters. This was completed in 1903 and the decision was taken at that time to commence the construction of accommodation for the boys ashore. On 4 October 1905, the new barracks, The Royal Navy Training Establishment, Shotley, was commissioned. HMS Ganges herself left Shotley in July 1906 for Chatham, leaving her figurehead to remain at Shotley (now displayed within HMS Ganges Museum in Shotley) as a reminder until the training establishment was itself closed in 1976. HMS Ganges was sold out of service on 31 August 1929 and broken up the following year. Various items have been made from her timbers, including a grand staircase on an estate in South Devon. The stern cabin is now a cocktail bar in a small hotel on Burgh Island in South Devon and numerous miniature rum barrels and other items continue to be offered to us as exhibits.

From 1905 until 1976, HMS Ganges was an uncompromising training establishment for the Royal Navy, designed to turn boys into men fit to serve in His/Her Majesty’s Fleet and in today’s museum we are proud to remember all those who trained or served in HMS Ganges and the Fleet.

Quoted from ‘The Life and Times of HMS Ganges’ compiled by Dickie Doyle.

At HMS Ganges Museum we are pleased to take part in promoting The Suffolk Armed Forces Wellbeing Working Group which brings together NHS organisations, Suffolk County Council, and military charities and seeks to improve services for veterans and make it easier to get help when needed.

Some Armed Forces Veterans can experience mental health problems after leaving service but only about half seek help from the NHS, or are referred on to specialist mental health support.

The group has created a survey asking for views from veterans and their families on the support available from NHS, charities and local support groups. How easy is it to get the help you need, when you need it, and what is missing? If you are a veteran or the family member of a veteran, please have your say, whether or not you have used mental health support services. Here is the link to the survey: www.smartsurvey.co.uk/s/VeteransMentalHealth

Your responses will be treated in strictest confidence and will be used to help improve services for veterans in Suffolk. Please respond by January 31 if you can but as the deadline may have passed before this edition is delivered, contact our secretary if you need further help.

Information on sources of support for veterans is available from several organisations including: