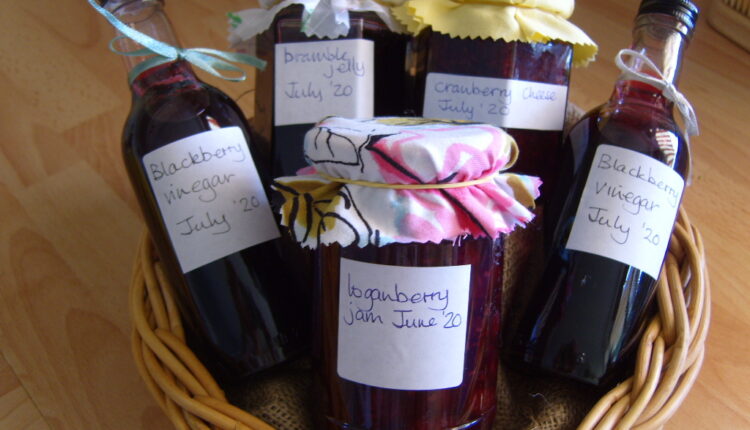 At the moment, like many other people, I have quite a bit of spare time so I have been busy making jams, jellies, fruit vinegars and chutneys, as well as fruit cheeses and butters using fruit from the garden.

This has been a really good year for soft fruit. Maybe the rain we had in the autumn and winter and the warm spring has made all the difference. I have a loganberry which I grow along a warm south west facing fence and there have been pounds and pounds of berries which I have just about kept on top of with picking and freezing.

A few years ago my neighbour gave me a small blackberry plant. It grows on the same fence as the loganberry and is always covered in whitefly when the flowers are setting. I just leave them and they seem to disappear before the plant produces large fruits which crop early, usually towards the end of June or beginning of July which I had always thought was unusual for a blackberry. The fruits are longer than a normal blackberry and having watched something on Gardeners’ World the other week, I think they might be ‘youngberries’, which I had never heard of before.

Information found online suggests they are a cross between a blackberry and a dewberry and named after Byrnes M, a young a businessman from Louisiana USA who was interested in science and plants and who created this hybrid. So there we have it; every day’s a school day as they say.

Both these fruits freeze well and are so easy to grow. Just cut the fruited canes down to ground level in the autumn, tie in this year’s new growth, go in and make a cup of tea and wait until next summer!

In view of all the uncertainty at the present moment, we have decided that the garden club will not meet for the remainder of 2020. We hope, as far as possible, to carry over this year’s programme to next year. We all look forward to meeting again in what will hopefully be a better year in 2021.