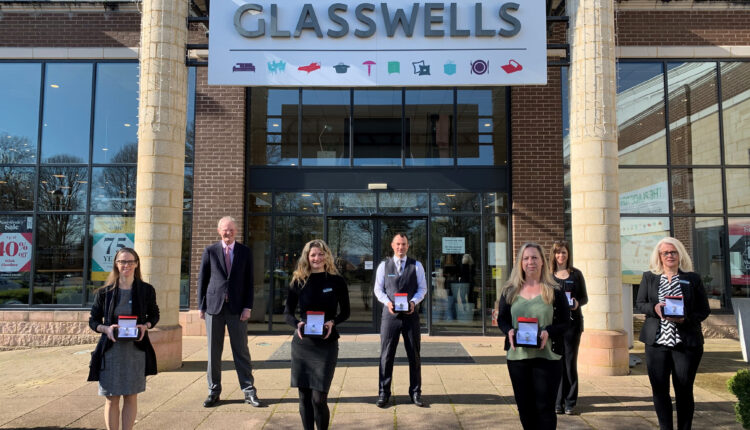 Long-standing members of staff have been rewarded for their loyalty to mark the reopening of Glasswells this week.

As the family-run store reopened its doors to customers, nine members of staff were recognised after each clocking up 20 years of service for the business.

Paul Glasswell said: “For almost 45 years, we have honoured our long-serving staff members and ahead of our 75th anniversary year, and just before reopening once again, it seemed like the ideal opportunity.

“I would like to thank and congratulate everyone who has provided 20 years dedication working for Glasswells. It is a momentous achievement and one they, and the entire business, should be proud of.

“We have an honours board with the names of everyone who has achieved this milestone and I am delighted to see that we now have almost 100 people who have joined this exclusive club.”

The staff members were presented with gifts and thanked during a staff gathering in the Bury St Edmunds on Monday morning – just before the doors reopened to the public once again.

It replaced the traditional annual staff party which was cancelled this year due to the national lockdown.

Also recognised was the retirement of Peter Holland and also Margaret Bailey, who leaves after 40 years working in the accounts department of the family furnishers.

And the department of the year shield was awarded to Glasswells’ website team following a record-breaking last year.

Mr Glasswell added: “It has been wonderful reopening this week and seeing our customers and colleagues once again. I would like to thank all staff members for their dedication and hard work over the last year.”