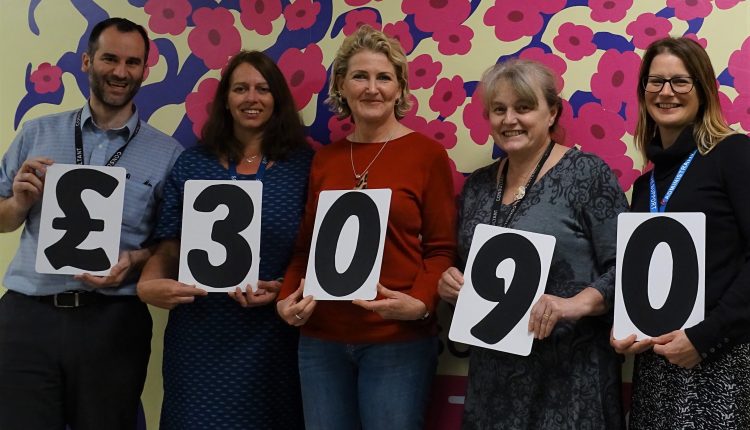 Fundraiser Swims to France and back – without going anywhere near the Sea!

Kirstie Boxall wisely decided not to go anywhere near the chilly North Sea for her epic swimming challenge. Instead she swapped being covered in lanolin for the comfort of the land and headed to Ufford Park swimming pool to complete her quest. She swam 38 miles in 35 consecutive days which is the equivalent of swimming across the English Channel to France and back again.

Kirstie’s challenge was not without cause. Two years ago she was diagnosed with triple negative breast cancer (TNBC). This is an uncommon form of breast cancer and is typically more difficult to treat. Kirstie bravely endured ten months of intensive treatment, taking part in a clinical trial which included seven cycles of chemotherapy over five months. The intensive treatment amounted to 15 sessions of which 12 were weekly. During this time she also developed neutropenic sepsis (which she luckily recovered from), had two operations and 24 sessions of radiotherapy.

Despite all the turmoil of her treatment she remained positive and cheerful, always thinking that there was someone in a far worse situation than herself. Thankfully she was given the all clear when her treatment finally finished in January 2018. Once off the rollercoaster the realisation set in and Kirstie, like so many cancer patients, found coming to terms with everything very difficult and daunting. Getting back in touch with the real world and moving on with her life after months of hospital visits which had become the norm was tough.

To kick start the process she joined the HOPE (Helping Overcome Problems Effectively) course so she could understand and process what she had been through. It helped immensely and gave her the building blocks to move forward. As part of the course her first goal was to get back in the pool which was something which she had previously taken for granted, but was a huge step in this instance.

Kirstie explains: “I have been swimming to overcome the ‘fallout’ from the after-effects of my treatment from triple negative breast cancer. By doing this I hope to encourage other people in a similar position and to raise money for Colchester & Ipswich Hospitals Charity’s Blossom Appeal. The Blossom Appeal aims to help raise £2.5 million to build a new breast care centre at Ipswich Hospital. Taking on the challenge was my way of saying thank you to everyone who looked after me and it was wonderful to have a sense of purpose again whilst proving to myself that I could do it!

“Feeling like I have over the last two years, I never thought that I would be in a position to be able to do this. Although it was a struggle, I had this hair brained idea in my head since last November as I wanted to give something back and I needed a goal.

“I was back in the pool as soon as I was able following the end of my treatment and I haven’t looked back since. I have been determined to get my movement back, overcome the fatigue and pain and push myself to become strong in mind and body.

“Originally I was going to swim 19 miles over a month, bearing in mind that I was still recovering. However, with a provisional date looming for my third and hopefully final operation, I had to squeeze it in to only 17 days and increase my daily distance to at least 138 lengths (1.29 miles) of the pool each day and even 172 lengths on one day!

“Whilst swimming along I had the crazy thought that as I had reached France in my mind, the only reasonable thing was to swim back to England. So that’s what I did and in doing so earned myself the nickname of ‘The Forest Gump of Swimming’!

“As I was swimming the return leg my operation date was confirmed which meant I once again had to up my daily distance. I just made it and not sooner had I washed up on our shores I was off to the hospital once more. Recovering from the surgery took time and it’s only now I am able to reflect on what I accomplished.

“I have been overwhelmed by the generosity of the donations and I have had such amazing support from so many, such as the invaluable team at the John Le Vay Cancer Support Centre at Ipswich Hospital. They have been instrumental in putting me and my family back on our feet.

“Huge thanks also goes to all the departments at both Ipswich and Colchester hospitals that treated me. I feel very privileged to have received the care and expertise that I have and continue to do so. The NHS is truly an amazing service.

“In saying that, I would also like to help raise the profile of triple negative breast cancer. By being able to be part of the clinical trial of the ‘Partner Study’, I hope that it helps in some way to find a cure for this uncommon type of breast cancer. I felt very lucky to be part of the trial and although it was a particularly gruelling treatment, I met some wonderful people who are very special to me. It is also a perfect example of one of the benefits to come out of Colchester and Ipswich Hospitals merging. I had a leg in each camp, so to speak and received treatment and expertise from both locations.

“And last, but by no means least, thank you to you for taking the time to read this and if you are able to donate even the smallest amount to The Blossom Appeal and my crazy challenge, I would be very grateful as it all adds up.”

So far Kirstie has raised a spectacular £3,090 for The Blossom Appeal. If you would like to support her, visit: www.justgiving.com/fundraising/kirstie-boxall-was-mclaren.