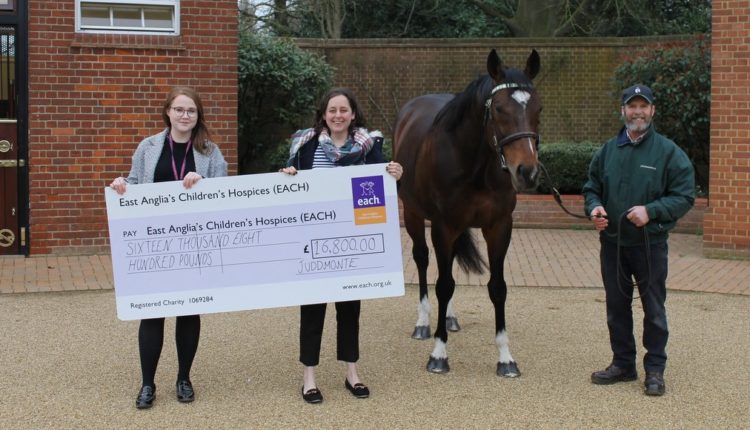 Frankel Fundraising Pays For Day of EACH Care & Support

Frankel fundraising pays for a day of EACH care and support, as racehorse celebrates 12th birthday

Staff of and visitors to Juddmonte Farms, home to legendary racehorse Frankel, have raised £16,800 to fund a day of care and support from East Anglia’s Children’s Hospices (EACH) in celebration of the superstar’s 12th birthday.

Frankel became an EACH Ambassador in 2014, in recognition of the funds and awareness generated for the charity following his unbeaten 14-race career. A racehorse that transcended the sport like no other, tours to see Frankel at Banstead Manor Stud near Newmarket, home of Juddmonte’s European operation, were hugely popular in 2019, with some money from ticket sales donated to EACH.

Funds were also raised through raffles and bucket collections, whilst one member of staff, Jake Woolf, raised over £5,000 by running the London Marathon.

The amount EACH has received pays for a day of care and support from all three of its hospices across the region in Milton, Cambridgeshire, Ipswich, Suffolk, and Framingham Earl, Norfolk.

She said: “It was great to see Frankel looking healthy as ever and to catch up with the hard-working Juddmonte team. We’re very grateful for all the awareness Frankel brings as our ambassador and, indeed, the funds raised. We’d like to say a big thank you to everyone at Juddmonte for their support and, of course, wish Frankel a very happy birthday!”

Kate Hannam, Juddmonte Marketing Manager, said: “EACH is a charity very dear to Juddmonte and we’ve been a proud supporter since Frankel’s trainer Sir Henry Cecil first nominated it as the beneficiary for sales of merchandise in 2012. In 2019 Juddmonte staff set themselves the task of raising enough money to fund all three hospices for a day and rose to the challenge! Thank you to all our visitors and clients who helped us get to the total.”

Juddmonte is one of the world’s leading owner/breeders of thoroughbred racehorses and has bred over 110 individual Group/Grade 1 winners of over 210 Group/Grade 1 races, including Frankel, the highest rated horse since records began. Juddmonte races all its homebred progeny in Khalid Abdullah’s famous green, pink and white colours, and has farms in the UK, Ireland and the USA, standing its European stallions at Banstead Manor Stud near Newmarket. For more details visit www.juddmonte.com.

For more information about EACH go to www.each.org.uk.

‘Ed for The Mansion in Half-Term for Sheerio treats