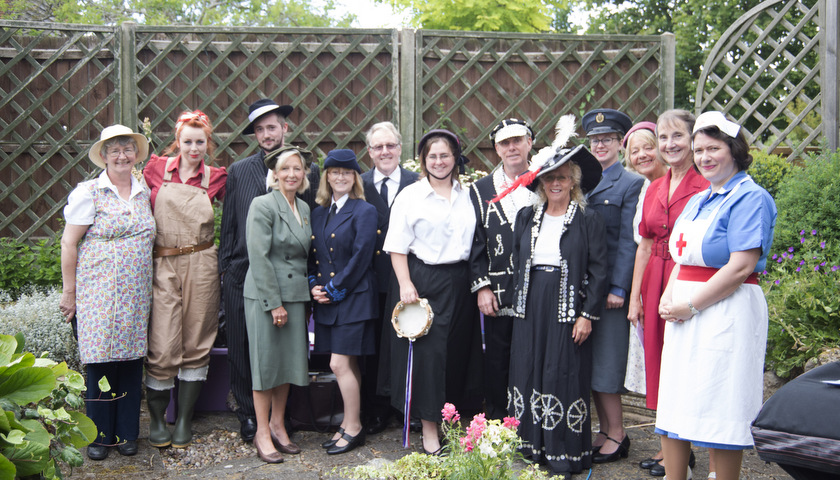 A replica First World War trench with recorded artillery and machine gun fire was a feature in a 1914 First World War garden party exhibition, concert and art show organised by Capel St Mary War Memorial Trust on Sunday 25th June . The trench was originally in an army regimental museum. It was found in bits in a field and has been re-assembled. It will be used later in schools and for other projects.

Three hundred people, many in a variety of uniforms and wartime civilian clothes, visited the trench, listened and applauded as The Orchard Players sang, in two sessions, songs from the First and Second World Wars. Capel’s Art for Fun club had a fine display of war-themed paintings. Money from paintings sold was donated to the War Memorial campaign.

The exhibition included information about the brave Capel men, former pupils at the village school, who gave their lives in the First and Second World Wars. There was a display of First World War weapons and patriotic posters calling for recruits for the war and home fronts.

The exhibition was an awareness project in support of the campaign to raise money to build the village’s first-ever War Memorial Monument. The monument will be dedicated on November 11, 2018, the 100th anniversary of the end of the First World War.

The trust has distributed an eight-page newspaper, Capel Times, throughout the village which reports on the build up to, and start of, the First World War. There will be three more issues of the newspaper, with the second being published in the autumn.

Check out the events of the day, through photos, below.