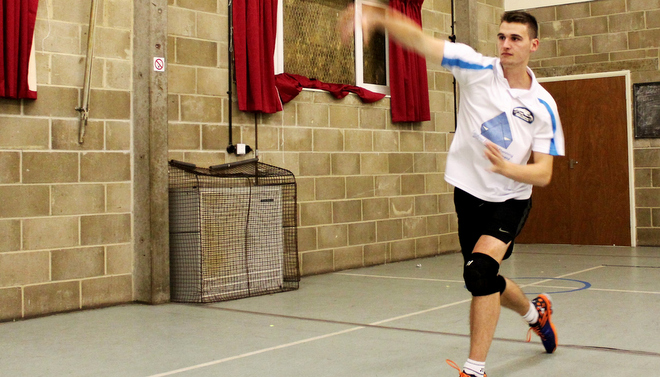 It’s the game made famous by the Hollywood movie featuring the hilarious on-court antics of funny men Ben Stiller and Vince Vaughn.

But dodgeball is actually one of the UK’s fastest growing sports with 750,000 active players – and Suffolk has its own rising star.

Matt Healey has been selected to represent England after his skills caught the attention of national team coaches during trials in Leicester.

“It was great to find out I had been selected and to know I was at the level required,” said the 19-year-old Suffolk New College student. “It’s a massive achievement – definitely my biggest so far.

“While I won’t be picked for the first team just yet, I am now part of the squad which gives me the chance to train with the best players.”

Matt, who is a second year Level 3 Sports student, is the youngest member of the squad and only took up the game three years ago.

He currently plays for Ipswich Igloos, training once a week and competing in tournaments across the country most weekends.

Matt’s accomplishment in making the national squad is all the more impressive because England are world champions, having won the inaugural Dodgeball World Cup last summer.

“Dodgeball is one of the fastest growing sports and has been for the last ten years,” said Matt, who has also represented Suffolk at badminton and is captain of the College volleyball team.

“The World Cup was in Manchester during the summer and England won. We have the best team by some way.”

So what does it take to be a top dodgeball player?

“You need to have a strong arm and throw well,” said Matt. “A lot of the players are throwing the ball at 70mph so you need to be agile. It’s quite a brutal sport, too. During the trial I suffered minor concussion.”

Because there is no government funding for dodgeball, Matt is hoping to find a sponsor to allow him to continue to compete at the highest level.

“It’s a self-funded sport and it’s quite costly having to pay for kit and travel around the country competing,” said Matt, who plans to go on to study sports science at university next year.

“I am at College full-time and with my training commitments it’s quite hard to get the money to pay for everything.”

Anyone interested in sponsoring Matt should email him at [email protected]